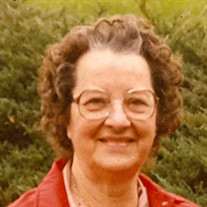 Alberta C. (Bair) Fields, 92, of Long Branch, passed away peacefully with her family by her side, Monday, January 18, 2016 after a short illness at Mon Valley Hospital. She was born on January 16, 1924 in Duquesne and was the daughter of the late Edison and Marie (Farabaugh) Bair. She was married to the late Charles A. “Bud” Fields who died on March 11, 2008. She was a member of St. Sebastian Roman Catholic Church, Belle Vernon. Alberta is survived by one son and daughter-in-law, Charles A. and Sunny Fields, Jr. of Newton Falls, OH; one daughter and son-in-law, Carol and Wesley Boyle of West Brownsville; three grandchildren, Louis “Lou” Sibula, Jr. of Williamsport, Melissa “Missy” Streitferdt and her husband Dan of Newton Falls, OH and Kevin Fields of Newton Falls, OH; three great-grandchildren, Ashley Heverly and her husband Ben of Lake Milton, OH, Nick Sibula and his wife Julie of Markleysburg and Maggie Schroeder and her husband Chad of Winter Garden, FL; one great-great grandson Lane Heverly; two brothers and one sister-in-law, Edwin and Virginia Bair of Brownsville and LeRoy Bair of Brownsville; and two sisters and one brother-in-law, Loretta and Joe Crone of Coal Center and Darlene Shemansky of Richeyville. In addition to her parents and husband, she was preceded in death by one grandson, Scott A. Sibula; two brothers, Robert “Bob” and Eugene “Gene” Bair; and one sister Alva Harris. There will be no public visitation. A funeral mass will be held in St. Sebastian Roman Catholic Church at 1:00 P.M. Friday with Father James Bump as celebrant. The Ferguson Funeral Home and Crematory, Inc. is handling the arrangements (724-929-5300), 700 Broad Avenue, Belle Vernon. www.FergusonFuneralHomeAndCrematory.com Interment will follow in Mt. Calvary Cemetery, Coal Center. The family would like to give special thanks to all the nurses on the 6th floor and hospice staff. In lieu of flowers, the family asks that memorial contributions be made to the OSPTA Hospice, 625 Lincoln Ave. Ext, Suite 207, N. Charleroi, PA 15022-2451.

Alberta C. (Bair) Fields, 92, of Long Branch, passed away peacefully with her family by her side, Monday, January 18, 2016 after a short illness at Mon Valley Hospital. She was born on January 16, 1924 in Duquesne and was the daughter of the... View Obituary & Service Information

The family of Alberta C. Fields created this Life Tributes page to make it easy to share your memories.

Send flowers to the Fields family.