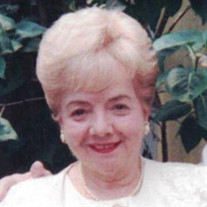 Betty R. Waugaman, 93, of Belle Vernon, went to be with the Lord on Saturday, September 5, 2020 in Mon Valley Hospital. A daughter of the late James W. and Edythe McKnight Rutledge, she was born in Fayette City on April 14, 1927. Betty was a member and Elder of the Charleroi Presbyterian Church, a member of the Eastern Star and was formerly a member of the First Presbyterian Church of Belle Vernon where she had been the President of the H.O.A., taught Sunday School and had served as an Elder. She had been a resident of Belle Vernon for most of her adult life and retired in 1989 as a bookkeeper for the former Jack Roley Pontiac-Cadillac dealership. She enjoyed playing Mah Jongg with family and friends and was a dog lover, having had many dogs over the years. Betty was ever young at heart, and when asked her age, she was always 29. She was a grand lady and a true friend to those that she held dear. Surviving are many nieces and nephews including B.J. Thomas, with whom she made her home, Joanne Friday of Matunuck, RI, Don Grazzini and Tim Grazzini, both of Richland, WA and Ralph Waugaman of Greensburg, her best friend, Lucy Rippel of Monongahela, her dog, Cooper, and a step daughter, Donice Horton of North Sannich, BC, Canada. In addition to her parents, she was preceded in death by her husband, James Donald 'Don' Waugaman on February 14, 2017; two brothers, James W. "Skip" Rutledge and John Roy Rutledge; and three sisters, Louise Davis, Ruth Ann Grazzini, and Jean Sherman. Betty was the last of the Rutledge Clan. Friends will be received from 2 P.M. to 8 P.M. on Wednesday in the Ferguson Funeral Home and Crematory, Inc., 700 Broad Avenue, Belle Vernon. WWW.FergusonFuneralHomeAndCrematory.com. 724-929-5300. Face masks will be required in the funeral and guests are limited to 25 people at any given time. Funeral services will be in the funeral home at 10 A.M. Thursday, September 10, 2020. Entombment will follow in the Belle Vernon Cemetery Mausoleum. In lieu of flowers, the family suggests donations to an animal rescue organization or the charity of one's choice.

Betty R. Waugaman, 93, of Belle Vernon, went to be with the Lord on Saturday, September 5, 2020 in Mon Valley Hospital. A daughter of the late James W. and Edythe McKnight Rutledge, she was born in Fayette City on April 14, 1927. Betty was... View Obituary & Service Information

The family of Betty R. Waugaman created this Life Tributes page to make it easy to share your memories.

Send flowers to the Waugaman family.