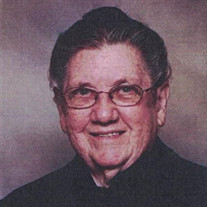 Betty J. West, 93, of Uniontown, went to be with the Lord on Wednesday, May 13, 2020. A daughter of the late Florance and Helen Tunney Decker, she was born in Clairton on April 7, 1927. Betty had been a resident of Havelock, Ontario from 1970-1998, spent six years in South Carolina, and had been a resident of Uniontown since 2013. She attended the Allegheny Wesleyan Methodist Church in Brownsville. She is survived by four sons and daughters in-law, Robert and Kathy West of Donora, Kenneth and Christine West of Walhalla, SC, James Ronald and Susan West of Stanton, MI, and Danny Joe and Jo-Ann West of Pickens, SC; three daughters and sons in-law, Donna and Ray Mishler of Stanton, MI, Marsha Parker of Peterborough, Ontario, and Debra Jean and Fred Reck of Apsley, Ontario; 18 grandchildren, 35 great-grandchildren, and eight great, great-grandchildren. In addition to her parents, she was preceded in death by her husband, James Raymond West on July 14, 2016, and three grandsons. Visitation and funeral services will be private for immediate family. Arrangements have been entrusted to the Ferguson Funeral Home and Crematory, Inc., 700 Broad Avenue, Belle Vernon. 724-929-5300 www.FergusonFuneralHomeandCrematory.com. Interment will be in Belle Vernon Cemetery.

The family of Betty J. West created this Life Tributes page to make it easy to share your memories.

Send flowers to the West family.