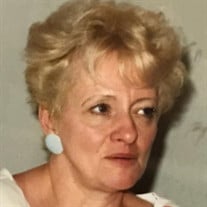 Beverly Jean Mascara, of Belle Vernon, PA passed away at her home on March 27th, 2022 with her family by her side. She was proceeded in death by her father, William Mascara, mother, Elsie Mascara, and son, Jeffery Lukas. She is survived, in love, by her brother, Phil Mascara, and her daughters Tammy Barron, Kim Venneri, Amy Lukas, and Gigi Signorello-Payne. She is also survived by her 11 grandchildren, 8 great-grandchildren, and many nieces and nephews. Beverly lived in Belle Vernon, PA before moving to Florida in 1989, followed by a subsequent move to SC in 2018 to be closer to her family. After graduating from Robert Morris University, she worked at Westinghouse, Lukas Auto Body, Corning, Genesis, Disney, Epcot, the State of Fla, as well as the Presbyterian Church. She devoted much of her time and energy as a caregiver to family members, including her mother until she passed away at age 105. Her greatest love, above all, was her family, and all her children were proud to call her mom. Beverly had a servant’s heart and lived by 1 Peter 4:10: “Each one should use whatever gift he has received to serve others, faithfully administering God’s grace in its various forms.” Dedicating her life to the Lord Jesus Christ, Beverly was baptized in the Jordon River in 2019. A life celebration will be held at a later date. The family requests those who wish to express sympathy to consider donating to Hospice of Upstate, Anderson, SC in Beverly’s name. I HAVE LIVED I am now old enough {86) and experienced enough to realize that I can't begin to see, hear, feel, learn or understand the tiniest bit of what is available to me at this time in history. I've been on 2 missionary crusades to Taiwan and Italy, Toured Israel at age 84 so I have seen some of the world, I know that I may never see more than that but feel it is enough. Worked at 6 different and interesting jobs. I can claim boldly that I have lived. I've painted my toenails. bleached my hair, touched the bark of a 200 year old tree. I've shopped on line and eaten tomatoes from a garden, I've made friends and hopefully not many enemies. I've spilled perfectly good popcorn on the theater floor, and wondered why clouds are white and that I am fascinated with them. I've given birth, buried a baby son, given birthday presents and watched and counted the birds sitting on a telephone pole. I have had breast cancer and diabetes. Ive made promises and kept them. I've had severe sunburns and a broken heart. I have helped carry bricks to built a cabin in the mountains and carried water to flush the toilet at a camp ground. I have roller skated, ice skated and snow skied and danced and sang with groups. I have been to New York and watched the famous Rockettes dance. I attended the very first World Fair as a child. I read cereal boxes, written "wash me" across the back of a dusty car and skipped rocks in a lake. I have ridden a horse, boats, dirt bikes and water skied with one ski. I've tucked children into bed and returned to watch them sleep. I've smelled lilacs, gasoline and apple pie baking in the oven. I have accepted Jesus Christ as my Lord and Savior and love my family. Yes there is so much more to see and try but If I die tomorrow know that I have lived. -Beverly Jean Mascara

Beverly Jean Mascara, of Belle Vernon, PA passed away at her home on March 27th, 2022 with her family by her side. She was proceeded in death by her father, William Mascara, mother, Elsie Mascara, and son, Jeffery Lukas. She is survived, in... View Obituary & Service Information

The family of Beverly Jean Mascara created this Life Tributes page to make it easy to share your memories.

Beverly Jean Mascara, of Belle Vernon, PA passed away at her...

Send flowers to the Mascara family.