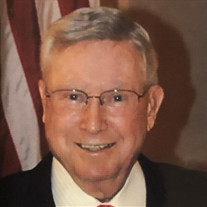 Charles Clinton Bradley, 98, passed away at home in Longwood, FL on Friday, December 21, 2018. A son of the late Howard and Tressa (Kellerman) Bradley, he was born in Bellwood, PA on November 10, 1920. Charles graduated from Brownsville High School, where he was class president for four years and played the trombone. He attended the University of Pittsburgh on scholarship, where he was in the ROTC marching band. In April 1942, he received a degree in civil engineering and a commission as a Second Lieutenant in the US Army Corps of Engineers. He served in North Africa, Sicily, and Italy during November 1942 to May 1945, earning the rank of Captain. Upon returning home, he married Patsy Speers of Belle Vernon, PA. Charles and Patsy lived in Lorain, OH, and Belle Vernon, before settling in Drexel Hill, PA, where Charles worked in engineering and manufacturing management at Philco Corporation, later known as Ford Aerospace. He and Patsy raised three children and were members of Drexel Hill United Methodist Church. After retiring from Philco-Ford, Charles and Patsy purchased and operated the John Poteat Collection and The Pear Tree, two gift stores located on Philadelphia's Main Line. They were members of Aronimink Golf Club. They retired to Orlando, FL, and were members of Arnold Palmer's Bay Hill Club. In 2005 they moved to Village on the Green in Longwood, FL. Charles loved to play golf and had four holes-in-one, the last while playing with family on Thanksgiving Day when he was 89 years old. He also loved to tell a good story, and liked nothing more than to be "asked to make a few remarks" at parties. He was still entertaining his friends and family with stories at his 98th birthday party on November 10, 2018. Charles is survived by his three children: Mark Howard (Judi) Bradley of Berwyn, PA, and Vero Beach, FL; Charles Stephen Bradley of Orlando, FL; and Pamela Joan (Richard Pabst) Bradley, of Pinehurst, NC. He is also survived by five grandchildren: Christopher Bradley, Jackie (Todd) Wilhelm, Stephen (Sarah) Bradley, Daniel Pabst, and Brian Pabst; and by eight great grandchildren. In addition to his parents, he was predeceased by his wife of 64 years, Patsy Speers Bradley and his brother, Derwin Bradley. Chapel services and burial will be on Saturday, December 29, 2018 at 9:30 A.M. in Belle Vernon Cemetery. In lieu of flowers, donations may be made to the endowed "Patsy Speers Bradley Scholarship" at Chatham University, Office of University Advancement, Woodland Road, Pittsburgh, PA 15232. The Ferguson Funeral Home and Crematory, Inc., Belle Vernon, PA is handling arrangements.

Charles Clinton Bradley, 98, passed away at home in Longwood, FL on Friday, December 21, 2018. A son of the late Howard and Tressa (Kellerman) Bradley, he was born in Bellwood, PA on November 10, 1920. Charles graduated from Brownsville... View Obituary & Service Information

The family of Charles C. Bradley created this Life Tributes page to make it easy to share your memories.

Charles Clinton Bradley, 98, passed away at home in Longwood,...

Send flowers to the Bradley family.