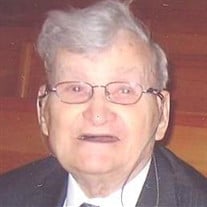 Charles W. Holet, 101, of Monessen, went to be with the Lord on Wednesday, April 6, 2016 in Mon Valley Hospital. A son of the late Michael and Mary Wosnik Holet, Charlie was born in Pricedale on December 14, 1914. Charlie spent most of his adult life in Monessen, having resided there since 1961. Charlie graduated from California State College and went on to earn his Master’s Degree at the University of Pittsburgh. He was a mathematics teacher at the former Donora Senior High School for 31 years. Charlie was a member of Marion Presbyterian Church in Belle Vernon, American Legion Post 659 of Belle Vernon, Elks 773 of Monessen, National Education Association, and Pennsylvania Education Association. Charlie served as a Lieutenant in the U.S. Navy during WWII. Charlie is survived by a daughter, Arlene Krajnik (Dave Lonich) of Belle Vernon, a son and daughter-in-law, Charles W. (Christann) Holet, Jr. of Gibsonia; two sisters, Ann Fazio and Evelyn Krivda both of Belle Vernon; six grandchildren, Kristen (Jude) Michaels of Bethel Park, Charles (Betsy) Holet, III of Upper St. Clair, Amy Elizabeth Holet of Gibsonia, Patty Emory, William Emory, and Stephen Emory; and two great grandchildren, Peyton Lynn Michaels and Tanner Lucas Michaels. In addition to his family, Charlie will be missed by Nancy Coal, his faithful caregiver for the past decade. In addition to his parents, he is preceded in death by his wife, Ida May Peters Holet on October 26, 1997; a daughter, Beverly Emory in 2013; four brothers, John, Andy, Pete, and Michael Holet; and a sister Helen Krivda. Friends will be received on Sunday from 2-4 and 7-9 PM at the Ferguson Funeral Home and Crematory, Inc., (724-929-5300), 700 Broad Avenue, Belle Vernon. www.FergusonFuneralHomeAndCrematory.com. A funeral service will be held on Monday at 10 a.m. in the funeral home, with Pastor Robert Prinkey officiating. Interment will follow in Belle Vernon Cemetery. The members of the Belle Vernon American Legion will meet in the funeral home at 7 PM Sunday for services.

Charles W. Holet, 101, of Monessen, went to be with the Lord on Wednesday, April 6, 2016 in Mon Valley Hospital. A son of the late Michael and Mary Wosnik Holet, Charlie was born in Pricedale on December 14, 1914. Charlie spent most of his... View Obituary & Service Information

The family of Charles W. Holet created this Life Tributes page to make it easy to share your memories.

Send flowers to the Holet family.