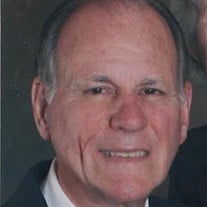 Charles T. Kmetz, 80, of Belle Vernon, passed away on Monday, June 17, 2019 in Arden Courts Memory Care, Jefferson Hills. A son of the late Joseph G. Kmetz, Sr. and Flora Celapino Kmetz, he was born in Sutersville on October 8, 1938. Charles was a member of the Church of St. Anne of Rostraver Twp. and retired in 1997 after 30 years of service from the Cabin Hill office of West Penn Power Company where he was a programmer analyst. Formerly of West Newton, Charles and his wife retired to Deep Creek, MD for six years, moved to Lake Hyco in Roxboro, NC until finally moving to Belle Vernon in 2011. He enjoyed playing basketball until age 50, loved water sports and boating, and was an avid Steelers fan. He is survived by his wife of 59 years, Ruth Ann Harvey Kmetz; a son and daughter in-law, Robert E. and Dorelle Kmetz of Rancho Santa Margarita, CA; and three grandchildren, Stephenie Kmetz, and her fiance, Timothy Kenny, of Hagerstown, MD, and Brian R. Kmetz and Eric T. Kmetz, both of Rancho Santa Margarita, CA. In addition to his parents, he was preceded in death by a son, Keith Charles Kmetz in 2006, a sister Lorraine Grimm in 2017, and a brother Joseph G. Kmetz Jr. in 1990. Friends will be received on Thursday from 2 to 4 and 7 to 9 P.M. in the Ferguson Funeral Home and Crematory, Inc., 700 Broad Avenue, Belle Vernon, 724-929-5300, www.FergusonFuneralHomeAndCrematory.com. A blessing will be held on Friday at 10 A.M. in the funeral home with Rev. Vincent J. Gigliotti officiating. Interment will follow in West Newton Cemetery. In lieu of flowers, the family suggests memorial donations be made to Viaquest Hospice, 610 Park Avenue, Monongahela, PA 15063.

The family of Charles T. Kmetz created this Life Tributes page to make it easy to share your memories.

Send flowers to the Kmetz family.