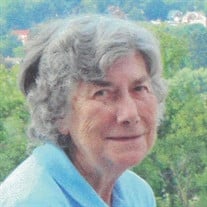 Claire E. Soles, 90, of Speers, peacefully went to be with the Lord on Tuesday, April 24, 2018 in Mon Valley Hospital. A daughter of the late Emil and Erma Zimmerman Vandermer, Claire was born in Charleroi on September 30, 1927. She married the late George H. Soles, Jr. on July 4, 1947, and they lived in Speers since 1949. Claire was a member of the Speers United Methodist Church and the United Methodist Women. She received her Master's Degree from the former California State College, taught at the former Gastonville Elemantary School and retired from the Charleroi Area School District. Following her retirement, she and her husband spent the next fifteen winters in Holiday, FL. She is survived by a son and daughter-in-law, Dennis and Katherine Soles of Fraser, CO; a daughter-in-law, Debra Soles of Baldwin; seven grandchildren, Christa (Andrew) Hlavsa of South Park, Jeffrey (Danielle) Soles, Jr. of Monongahela, Sarah Waller of Belle Vernon, Marlena Soles of Belle Vernon, Elle (Jordan) Ennis of Fraser, CO, Jennifer (Matthew) Todaro of Canonsburg, and John (Sarah) Ulrich of The Colony, TX; a granddaughter-in-law Twila Soles of Fort Collins, CO; 12 great grandchildren and one great grandchild on the way. In addition to her parents, she is preceded in death by her husband George on February 4, 2015; a son Jeffrey Soles, Sr. on January 23, 2004; a grandson, William Soles on June 6, 2016; a brother, Fred Vandermer on September 3, 2007; and a sister, Dorothy Benedetti on December 18, 2006. Friends will be received on Saturday from 10 a.m. to 12:00 Noon at the Ferguson Funeral Home and Crematory, Inc., 700 Broad Avenue, Belle Vernon. 724-929-5300. www.FergusonFuneralHomeandCrematory.com A funeral service will follow visitation on Saturday at 12 Noon at the funeral home, with Rev. Lori Walters and Rev. Matthew Todaro co-officiating. Interment will follow in Belle Vernon Cemetery. Memorial Contributions may be made to the Speers United Methodist Church, 810 Jane Avenue, Charleroi, PA 15022.

Claire E. Soles, 90, of Speers, peacefully went to be with the Lord on Tuesday, April 24, 2018 in Mon Valley Hospital. A daughter of the late Emil and Erma Zimmerman Vandermer, Claire was born in Charleroi on September 30, 1927. She married... View Obituary & Service Information

The family of Claire E. Soles created this Life Tributes page to make it easy to share your memories.

Send flowers to the Soles family.