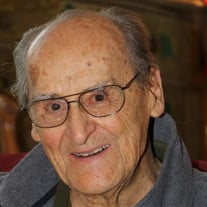 Curtis A. Prest, 105, died November 18, 2019 at the Residence at Hilltop in Monongahela, PA. Curt was born October 8, 1914 in Topsham, Maine, the son of Charles and Anna (Hurd) Prest. He lived in Topsham until his family moved to Billerica, MA in 1927. After his father died in 1928, his mother and siblings moved to Medford, MA. The youngest of four, Curt was predeceased by his brothers, C. Ashley and Cecil, and his sister, Cornelia. His mother died in 1974, one month before her 99th birthday. On December 8, 1941, the day after the bombing of Pearl Harbor, Curt enlisted in the Army. He served in an Army Ordinance division in the Panama Canal Zone. During that time, he learned the skills that he would use after the war working as a machinist for tool and die firms, and later as a draftsman. On his 33rd birthday (1947) Curt married Barbara Johnson from Medford, MA. They had four children. Their first child, Charles Austin, was born on their first anniversary, and Curt’s 34th birthday. Austin died as a child in 1953. Their second child, Margaret (Stuart), passed away in 1998. Curt is survived by his son and his wife, Loring and Denise (California, PA), and his daughter and her husband, Kitty and Myron Barker (Melbourne, FL). Curt had four grandchildren and three great-grandchildren: Oriana Stuart (South Lake Tahoe, CA), and her two children, MyeLayla and RyeLynne; Travis Prest (Pittsburgh, PA); Trevor Barker (Melbourne, FL); and Kristin (Barker) Bedard (Melbourne, FL), and her daughter, Cambria. Curt and Barbara lived in many places, including: several Boston suburbs; Vinal Haven, ME; and the NH towns of Amherst, Francestown, and Peterborough. They divorced in 1969. The following year, Curt married Nancy Hosmer. They lived in Chelmsford, MA; Merrimack, NH; and Whitefield, NH. Sadly, both Barbara and Nancy passed away in 2003. In 2004, Curt moved to Melbourne, FL to be near Kitty. Two years later, Curt moved north to enjoy four seasons, and to be near Loring in California, PA. After major surgery at 104 years old, Curt moved to a personal care home not far from California. During his life, Curt worked in a wide variety of occupations. In addition to machinist, he spent several years as a draftsman. In the 1960s, he helped draw the plans for the Saturn V booster rocket used in the Apollo moon missions. He worked in retail, managing various departments in several stores; tried his hand at running a printing business; and worked for an apartment rental company in Lowell, MA. In his later years, he went back to work at Wal-Mart in the paint department, and was one of the oldest employees in the company. He finally retired for good when he was 89 and moved to Florida. Curt loved his children. When they weren’t old enough to drive, he would take them to the ski areas, and sit all day waiting for them. Sometimes he would walk up the slope, so he could watch them ski by him. He loved to snowmobile with his family and friends. Curt and Loring raced them when Loring was in high school. When he was 86, Curt bought a new snowmobile. Boating, including waterskiing and sailing, was another family activity throughout his life. When he was 89, he bought a new sailboat. Always the daredevil, he challenged his children to never say “I am afraid to do that.” To Curt, taking risks was what made life exciting! He enjoyed the outdoors, including hunting, horseback riding, and camping. After moving to PA, he participated on two bowling leagues until he was 98. For at least 25 years, Curt had a desire to donate his body to a medical school for scientific research. He liked to think that they might learn something from him that would benefit others. In both NH and FL, he made donation arrangements with local universities. When he moved to PA, he signed up with West Virginia University. In honor of his desire, his body is now at WVU. Curt lived in many places, but Francestown, NH was especially meaningful to him and all the family. Therefore, in lieu of flowers, the family requests that memorial gifts be sent, in Curt’s name, to the Francestown Improvement and Historical Society, PO Box 147, Francestown, NH 03043. This charitable organization helps to maintain the history and buildings that make Francestown so special. The Ferguson Funeral Home and Crematory, Inc., 700 Broad Avenue, Belle Vernon is handling arrangements. 724-929-5300 www.FergusonFuneralHomeandCrematory.com

Curtis A. Prest, 105, died November 18, 2019 at the Residence at Hilltop in Monongahela, PA. Curt was born October 8, 1914 in Topsham, Maine, the son of Charles and Anna (Hurd) Prest. He lived in Topsham until his family moved to Billerica,... View Obituary & Service Information

The family of Curtis A. Prest created this Life Tributes page to make it easy to share your memories.

Send flowers to the Prest family.