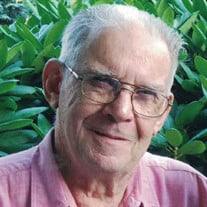 Dallas W. Price, 95, of Belle Vernon, passed away Tuesday, April 25, 2017 in Thorpe’s Personal Care Home, Charleroi. A son of the late Albert G. and Hazel Greene Price, he was born in N. Belle Vernon on October 5, 1921. A lifelong resident of Belle Vernon, Dallas enjoyed fishing, bowling and stamp collecting. He was an accomplished artist, specializing in covered bridges throughout Western Pennsylvania. He retired after 40 years from the Allenport Plant of the Wheeling-Pittsburgh Steel Company and was a proud veteran of the U.S. Army, serving as a military policeman in the European Theater during World War II. Survivors include two sons and daughters-in-law, Kenneth and June Price of North Haven, CT and Ronald and Mariann Price of Belle Vernon, one sister, Garnet Mikush of Finleyville, four grandchildren, Ron Price and Becca Price, both of South Carolina and Ken Price and Michelle Price Judge, both of Connecticut, and five great-grandchildren, Ryan, Brandan and Vera Price, Nathan Judge and Willow Bond. In addition to his parents, he was preceded in death by his wife, Sophie A. Price on January 16, 2015. Friends will be received on Friday from 7 to 9 P.M. in the Ferguson Funeral Home and Crematory, Inc., 700 Broad Avenue, Belle Vernon. 724-929-5300 www.FergusonFuneralHomeAndCrematory.com. Funeral services will be in the funeral home at 10 A.M. Saturday with Rev. Derek Platt officiating. Interment will follow in Belle Vernon Cemetery.

The family of Dallas W. Price created this Life Tributes page to make it easy to share your memories.

Send flowers to the Price family.