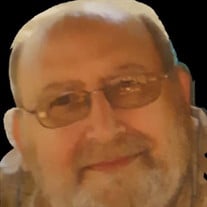 Donald S. Gotto, 72, of Donora, passed away after a lengthy illness on Saturday, April 30, 2022. A son of the late Samuel J. and Mary Karpac Gotto, he was born in McKeesport on June 6, 1949. A graduate of Elizabeth Forward H.S. in 1968, Donald was a U.S. Army veteran. He was employed by and retired from Hercules-Eastman Chemical Company in West Elizabeth. Donald enjoyed working with tools and gadgets and could be called “Toolman Taylor and/or “Inspector Gadget. Survivors include his wife of 48 years, Patricia Nall Gotto of Donora, a daughter, Leeanna J. Gotto, a son, Randy M. Gotto, both of Donora, a grandson, Carter Gotto, a father-in-law, James A. Nall, a sister-in law, Debbie (Raymond) Pulgino, a brother-in-law, Jimmy R. (Juji) Nall, a cousin, Marlene Gotto; and many nieces and nephews. Friends will be received in the funeral home on Tuesday 2 to 4 PM and 7 to 8:30 PM, the time of the funeral service in the Ferguson Funeral Home and Crematory, Inc., 700 Broad Avenue, Belle Vernon. 724-929-5300 www.FergusonFuneralHomeandCrematory.com. with Pastor Donald Thompson officiating. Interment will be in the National Cemetery of the Alleghenies. In lieu of flowers the family suggests a donation to the charity of their choice.

The family of Donald S. Gotto created this Life Tributes page to make it easy to share your memories.

Donald S. Gotto, 72, of Donora, passed away after a lengthy illness...

Send flowers to the Gotto family.