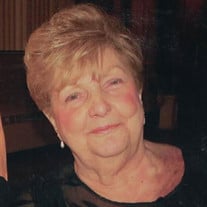 Donna Lee Ambrose, 81, of North Belle Vernon, went to be with the Lord on Sunday, August 11, 2019 surrounded by her loving family. A daughter of the late Negley and Hildegarde Byrne Rodgers, she was born in North Charleroi on December 22, 1937. Formerly of Fairhope, Donna had been a resident of North Belle Vernon for the past 60 years and was a member of St. Sebastian Roman Catholic Church. She was a graduate of Bellmar High School, class of 1955. Donna had been employed as the assistant head cashier and worked in the main office of the former Kroger in Uniontown and Belle Vernon, retiring in 1983. She enjoyed family vacations, cooking, baking, Christmas time, her Polaroid camera, and the QVC channel. A loving wife, mother, grandmother, aunt, and friend to everyone, she loved to spend time with her family, grandkids and great grandkids, whom she adored. She is survived by a daughter and son-in-law, Traci and Steve Pawlak, with whom she made her home; a son and daughter-in-law, Craig V. and Pam Ambrose of North Belle Vernon; six grandchildren, Jared Pawlak, Chelsea Pawlak, LeeAnn Pawlak, Courtney Ambrose, Jeff Ambrose, and his wife Shannon, and Cody Ambrose, all of North Belle Vernon; two great-grandchildren, Mia and Austin Ambrose; and two brothers and three sisters in-law, Negley W. and Dorothy Rodgers, Jr. of Fairhope, Nelson D. and Betty Rodgers of New Bern, NC, and Nancy Ambrose of Fayette City; one sister in-law and brother in-law, Michele and Charles Foster of Rochester, NY; and many nieces and nephews. She is also survived by her special friends, Sister Grace Snyder and Ellie Lauteri. In addition to her parents, she was preceded in death by her husband of 46 years, Vincenzo J. 'Winks' Ambrose, Jr. on May 8, 2002; two sons, Jeffrey Michael Ambrose in 1974 and Timothy J. Ambrose in 2014, a sister, Ruth Ann Novisel in 1984, a sister in-law, Teresa Ambrose in 1973, a brother in-law, Charles Ambrose in 2009, and special friend, Donna Ursits in 2016. Friends will be received on Thursday from 7 to 9 P.M. and Friday from 2 to 4 and 7 to 9 P.M. in the Ferguson Funeral Home and Crematory, Inc., 700 Broad Avenue, Belle Vernon. 724-929-5300 www.FergusonFuneralHomeAndCrematory.com. A blessing will be held on Saturday at 9:30 A.M. in the funeral home followed by a 10 A.M. Funeral Mass in St. Sebastian R.C. Church with Father Michael Crookston as celebrant. Interment will follow in Belle Vernon Cemetery. Members of the North Belle Vernon Fire Department will meet in the funeral home on Thursday at 7:30 P.M. The rosary will be prayed on Friday at 3 P.M., led by members of St. Sebastian Parish. Donna's family would like to thank the wonderful care she received from her "nieces", doctors, nurses, and aides at Mon Valley Hospital and Care Center.

Donna Lee Ambrose, 81, of North Belle Vernon, went to be with the Lord on Sunday, August 11, 2019 surrounded by her loving family. A daughter of the late Negley and Hildegarde Byrne Rodgers, she was born in North Charleroi on December 22,... View Obituary & Service Information

The family of Donna Lee Ambrose created this Life Tributes page to make it easy to share your memories.

Donna Lee Ambrose, 81, of North Belle Vernon, went to be with...

Send flowers to the Ambrose family.