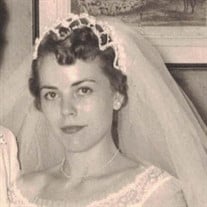 Doris Nelson, 89, formerly of Upper Arlington, OH, passed away Monday, September 2, 2019 in Presbyterian Senior Care, Southmont, in Washington, PA. She received excellent care from their dedicated staff, as well as the staff of Family Hospice and Palliative Care, for which her family is deeply grateful. A daughter of the late Ida Larsen Tobiason and Bertram Thorvald Tobiason, she was born in Brooklyn, NY on February 10, 1930, in what was a thriving Norwegian-American community in the Sunset Park neighborhood. Doris attended New York University, where she majored in journalism, and subsequently worked in New York City in the advertising industry, where she helped James Garner and other future luminaries succeed in the early stages of their careers. Doris created a legacy of which anyone would be proud as the first Arts Manager for the city of Upper Arlington, OH, a position in which she served for many decades and through which she helped to nurture what became a flourishing cultural arts program for the city. Upon her retirement, the Doris Nelson Arts Scholarship was established by the City of Upper Arlington and UA Arts in honor of her many years of dedicated service and strong belief in nurturing the arts. Two $1,000 scholarships are awarded to Upper Arlington High School seniors who plan to further their study in the arts and who create and / or perform in the following arts categories: vocal, music, theatre, film, video and visual arts. Past recipients of the scholarships have gone into arts internships, arts colleges and careers in the arts. Survivors include one daughter and son-in-law, Carole and Dr. John Chalfant of Coal Center, one son and daughter-in-law, Robert and Deborah Dupire-Nelson of San Francisco, CA, and four grandchildren, Ian Chalfant and Colin Chalfant, both of Coal Center, and Erik Dupire-Nelson and Heather Dupire-Nelson, both of San Francisco and New York City. Doris also leaves behind her sister, Joan Wessels of McCormick, SC, one niece, and three nephews. In addition to her parents, Doris was preceded in death by her husband, Robert L. Nelson (who also hailed from the same Norwegian-American community in Brooklyn) on May 25, 2007. Doris and her husband Bob had been married for over fifty years at the time of his passing. “As the green leaves of summer pass into the autumnal season of mists and mellow fruitfulness, we will carry with us always loving remembrances of her.” There will be no public visitation. Private graveside services will be held in Maple Creek Cemetery, Fallowfield Twp., Washington County. If friends wish, memorial donations may be made to the First United Methodist Church of Belle Vernon or Family Hospice and Palliative Care at FamilyHospice.org The Ferguson Funeral Home and Crematory, Inc., 724-929-5300, 700 Broad Avenue, Belle Vernon is handling arrangements. www.FergusonFuneralHomeandCrematory.com

The family of Doris Nelson created this Life Tributes page to make it easy to share your memories.

Send flowers to the Nelson family.