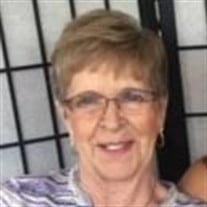 Dorothy K. Santmyer, 83, of Bentleyville, formerly of Rostraver Township, passed away on Thursday, August 1, 2019. A daughter of the late John and Freeda Spaniel Kerlicker, she was born in Collinsburg on January 18, 1936. A resident of Bentleyville since 1985, Dorothy was a member of the Nemacolin Country Club and Nemacolin Women’s Golf Association where she was the treasurer for many years. She was on the ladies bowling league in Bentleyville, was an avid golfer and reader, and enjoyed camping and fishing on the Allegheny River. Dorothy was also an animal lover and was especially fond of her cats. Dorothy and her husband were the former owners and operators of Beacon Supply Company in Belle Vernon. Survivors include her husband of 65 years, Ralph Santmyer; two daughters, Jill (Kevin) Ostetrico of Belle Vernon and Vicki (Greg) Giarrusso of West Newton; a brother Joseph (Carol) Kerlicker of Punta Gorda, FL; five grandchildren, Tara (Brett) Melegari of Elizabeth Township, Erica Santmyer of Washington, PA, Natalie (Jacob) Bober of Houston, TX, Laura Giarrusso of Pittsburgh, and Jason Giarrusso of Pittsburgh; and four great grandchildren, Baily Santmyer, Xavier Santmyer, Aria Melegari, and Giada Melegari. In addition to her parents, she was preceded in death by her son, Curtis Santmyer in 1985, two daughters, Pamela Hepple in 2008 and Rene Thomas in 2016; and a grandson, Jared Giarrusso in 2006. Friends will be received on Sunday from 5 to 9 P.M. in the Ferguson Funeral Home and Crematory, Inc., 700 Broad Avenue, Belle Vernon. 724-929-5300 www.FergusonFuneralHomeAndCrematory.com Funeral services will be held on Monday at 10 A.M. in the funeral home with Pastor Glenn Richardson officiating. Interment will follow in West Newton Cemetery.

Dorothy K. Santmyer, 83, of Bentleyville, formerly of Rostraver Township, passed away on Thursday, August 1, 2019. A daughter of the late John and Freeda Spaniel Kerlicker, she was born in Collinsburg on January 18, 1936. A resident of Bentleyville... View Obituary & Service Information

The family of Dorothy K. Santmyer created this Life Tributes page to make it easy to share your memories.

Send flowers to the Santmyer family.