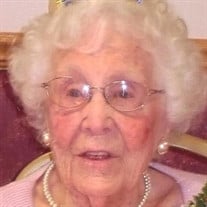 Edith G. Weaver, 103, of Belle Vernon (Fairhope), went to be with the Lord in her home on Friday, April 1, 2016. A daughter of the late John and Sarah Jane Weightman Robbins, she was born on February 4, 1913 in Roscoe. Edith attended the First Baptist Church of Belle Vernon, was a member of the First Baptist Church of Perryopolis, and was active at the Center on the Hill for many years. She was an avid card player until her recent illness and enjoyed watching TV game shows and working puzzles. A resident of Fairhope for all of her adult life, she was the head cook for the Belle Vernon Area School District, North Belle Vernon Elementary School for 10 years, retiring in 1978. Survivors include two daughters and one son-in-law, Peggy J. Holesapple, with whom she made her home, and Patsy and Thomas Gilchrist, all of Belle Vernon, four grandchildren, Patsy Cmar and her husband Steven, Craig Gilchrist and his wife Vicki, Brian Gilchrist and his wife Jane, and Cheryl Mendicino and her husband Dr. Michael Mendicino, nine great-grandchildren, Shaun Cmar and his wife Carla, Tom Gilchrist and his wife Laura, Timothy Gilchrist, Kelsey Gilchrist, Michael Mendicino, Tyler Gilchrist, Taylor Gilchrist, Kaylee Gilchrist, and Samantha Mendicino, four great great-grandchildren, Madisyn Cmar, Grayson Cmar, Ray Thomas Gilchrist, and Rosie Belle Gilchrist, and several nieces, nephews, and cousins. In addition to her parents, she was preceded in death by her husband, Lawrence Weaver on November 5, 1982, one son-in-law, Clyde Holesapple and five brothers, John, Richard, William Edward and Francis Lee Robbins. Friends will be received from 2 to 4 and 7 to 9 PM Sunday in the Ferguson Funeral Home and Crematory, Inc., 700 Broad Avenue, Belle Vernon, PA. 724-929-5300 www.FergusonFuneralHomeAndCrematory.com. A funeral service will be held at 10 AM on Monday in the funeral home, with Pastor Ronald Malm officiating. Interment will follow in Belle Vernon Cemetery.

Edith G. Weaver, 103, of Belle Vernon (Fairhope), went to be with the Lord in her home on Friday, April 1, 2016. A daughter of the late John and Sarah Jane Weightman Robbins, she was born on February 4, 1913 in Roscoe. Edith attended the... View Obituary & Service Information

The family of Edith G. Weaver created this Life Tributes page to make it easy to share your memories.

Send flowers to the Weaver family.