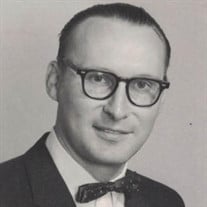 Edward “Ted” Kuhn, 83, of Winfield, WV, went to be with the Lord on August 29, 2016 at his home. The son of the late John E. “Ted” and Mary Pidanich Kuhn, he was born on July 21, 1933 in Newell, PA. Ted was raised in Belle Vernon, graduated from Belle Vernon High School in 1951, and was class president. He obtained a Master in Music Education from Duquesne University in 1957. Ted taught music at Aetna, Trafford, and Charleroi School Districts for 38 years. He also played saxophone and clarinet professionally at the Twin Coaches. Ted served in the U.S. Army’s 437th Civil Affairs Company for 10 years as a captain. He attended Winfield First United Methodist Church. Ted had a love for gardening and all his pets. Ted will be missed by his wife Janet Graffius Kuhn whom he married on July 18, 1964 in Trafford, PA; two daughters and one son-in-law, Beth Baran of Longview Texas and Karen (Brad) Myers of Kansas City, MO; two grandchildren, Rachel Anne and Jessica Lynn Myers; and one sister Mary Ann Dodds of Beaver, PA. He will be especially missed by his beloved cat, Bob. Friends will be received in the Ferguson Funeral Home and Crematory, Inc., 700 Broad Avenue, Belle Vernon. 724-929-5300 www.FergusonFuneralHomeAndCrematory.com on Friday, September 2, 2016 from 7-9 P.M. A funeral service will be held in the funeral home on Saturday, September 3, 2016 at 10 A.M. with Rev. Suzanne Currie officiating. Interment will follow in Belle Vernon Cemetery. In lieu of flowers, donations may be made to Little Victories Animal Rescue, P.O. Box 247, Barboursville, WV 25504.

The family of Edward "Ted" Kuhn created this Life Tributes page to make it easy to share your memories.

Send flowers to the Kuhn family.