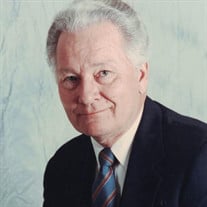 Edward J. Lyons, 82, of North Belle Vernon, passed away Tuesday, May 16, 2017 in Jefferson Hospital. A son of the late George A. and Mary Tomayko Lyons, he was born in North Charleroi on February 15, 1935. A lifelong resident of North Belle Vernon, he was actively involved in the community. In 1956, Ed joined the North Belle Vernon Volunteer Fire Department, where he served on various committees as well as second and first vice presidents and served as a driver. He was also a member of St. Sebastian R.C. Church and joined the Knights of Columbus #3026 where he held the position of Grand Knight from 1960-61 and was the past district deputy, 4th degree Bishop Phelan and was a member of the General Assembly. Starting in 1960, Ed started his term as a North Belle Vernon Councilman and held this position until 1972, when he was elected as Mayor. He held this position until 1980, and was again re-elected as the Mayor from 2006 until his retirement in 2013. Ed also was a member of the American Legion and was the President and CEO of the Private Industry Council. Ed's passion was golfing, and he played on with the Monday Night Golf League at Cedarbrook. Survivors include his wife of 62 years, Pearl Harvey Lyons; three sons and two daughters-in-law, Edward J. and Michelle Lyons of Monessen, George and Patty Lyons of Belle Vernon, and Gregory Lyons of Belle Vernon; one sister, Margie Krall; four grandchildren, Jillian (Ben) Hawk of Connellsville, Kady Jo (Charles) Bowman of Parkersburg, WV, Chelsea (John) Benson of Ravenswood, WV and Alicia Lyons of Pittsburgh; five great grandchildren, River and Wyatt Benson, Summer, Charley and Rachel Bowman, all of West Virginia; four nephews, Frank Krall, Jason Krall and Jerome Lyons, all of Perryopolis, Robert Callahan of Pittsburgh; a niece, Suzan Koosar of Chicago and two faithful companions, Sammy and Sasha. In addition to his parents, he was preceded in death by two brothers, Jerome and Anthony Lyons; a sister, Rosemary Callahan and a nephew, Sean Callahan. Friends will be received 2 to 4 and 7 to 9 P.M. Friday in the Ferguson Funeral Home and Crematory, Inc., 700 Broad Avenue, Belle Vernon. 724-929-5300 www.FergusonFuneralHomeAndCrematory.com A blessing service will be in the funeral home at 9:30 A.M. Saturday followed by a 10 A.M. Mass of Christian Burial in St. Sebastian R. C. Church with Msgr. Roger A. Statnick as celebrant. Entombment will follow in Belle Vernon Cemetery. A service will be held in the funeral home at 6:45 P.M. Friday by the members of the North Belle Vernon Volunteer Fire Department.

Edward J. Lyons, 82, of North Belle Vernon, passed away Tuesday, May 16, 2017 in Jefferson Hospital. A son of the late George A. and Mary Tomayko Lyons, he was born in North Charleroi on February 15, 1935. A lifelong resident of North Belle... View Obituary & Service Information

The family of Edward J. Lyons created this Life Tributes page to make it easy to share your memories.

Send flowers to the Lyons family.