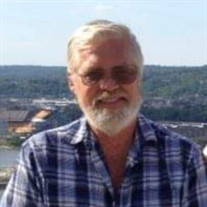 Edward Paul “Starsky” Staryarsky passed away on Saturday, March 13, 2021 at the age of 67. Starsky was born on June 29, 1953 to Joseph and Pauline Staryarsky in Hunker, PA. Starsky was a jack-of-all trades; paramedic, surveyor, contractor, builder, bouncer, ski patroller, business owner, inventor, polka band musician, mountain man, and friend to all. He could do and did anything that he set his mind to. He met his wife, Gloria, while working at Seven Springs Resort. Over the course of their marriage, Starsky designed and built two homes that his family grew together in. His ongoing battle with Multiple Sclerosis showed his courage in facing life’s challenges with his smile and carefree attitude. Despite the pain, Starsky was a true hero in his battle and stayed strong until the end. Starsky was preceded in death by his parents, Joseph and Pauline V. Staryarsky. He is survived by his wife Gloria, his children, Edward (Hoboken, NJ) and Michaelene (El Paso, TX), one granddaughter, Lordyn Star (El Paso, TX), brothers, Joseph, William and Thomas, sisters, Patricia and Ann, as well as several nephews and nieces. Starsky will be honored in a memorial service on April 3, 2021. If you wish to attend, please contact immediate family for details. Arrangements have been entrusted to the Ferguson Funeral Home and Crematory, Inc., 700 Broad Avenue, Belle Vernon. 724-929-5300 www.FergusonFuneralHomeandCrematory.com. If friends wish, memorial donations may be made in Starsky’s honor to the Make-A-Wish Foundation.

The family of Edward Paul Staryarsky created this Life Tributes page to make it easy to share your memories.

Send flowers to the Staryarsky family.