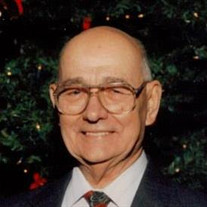 Ernst H. Holler Ernst Henry “Ernie” Holler was born in Gary, Indiana on 9/22/1915. Son of the late Frosty O. Holler and Grace Mowry Holler both of Bard, near Bedford, Pa. Ernie was a lifelong resident of Charleroi, N. Charleroi, Fallowfield Twp. He retired from Wheeling-Pittsburgh Steel, Monessen plant in 1978 as a foreman in Blast Furnace Electric Department after a forty-three year career in the mill. Ernie graduated from Charleroi High School in 1936 and volunteered for the draft in 1940, hoping to serve a year in the service before returning to his job in the Soaking Pits at Monesson. The news of December 7, 1941 shattered that dream and Ernie served in the U.S. Army until September, 1945. He spent 17 months serving in North Africa with the First Armored Division chasing German Field General Rommel. Ernie was field promoted to Staff Sergeant in the US Army in 1943 and later became a Master Sergeant. After the war, he returned to his job in the mill. On 12/14/1945 Ernie married Laura Jean Brownson of Ogden, UT in Elko, Nevada. The couple met in 1944 in Ogden at Hill Field, an Army air base where Ernie served as a supervisor of the German prisoner barracks after completing his overseas duty. Laura was a war-time truck driver making deliveries to the facility. The couple made Charleroi their home and lived a textbook version of the American Dream. Ernie worked through the ranks in the mill and contributed to the community in many ways. Including his father, Frosty, and brother, Ed, the three men worked in the Monessen mill for 113 years, much of that simultaneously. Without fanfare or accolades, Ernie was a proud, hard-working member of “The Greatest Generation.” Ernie was a life-long Boy Scout. He joined in 1926 after viewing a window display in downtown Charleroi. Ernie was the third Eagle Scout in Mon-Valley area, earning “his wings” in 1935. Upon returning to Charleroi after the war, he became a long time adult leader for North Charleroi, Troop 125. During his many years with the active troop, he saw over 500 boys become Scouts with many, including all four of his sons, earning Eagle rank. Ernie received the “Woodbadge” award in 1966 and was a Vigil member of the Order of the Arrow. Ernie enjoyed wood crafting, backyard bird watching, and all Pittsburgh sports. A life-long sports fan, Ernie usually wore a Steelers or Pirates sweatshirt. A quiet man, he spent many hours in his shop producing toys and other craft style products that were given to others. Preceded in death by his beloved wife Laura on August 9, 2015, a brother Charles E. Holler and wife Annabel Baird Holler of Belle Vernon, sister Eileen and husband Bob Pugh of Bradenton, FL, and sister Esther and husband Glenn Sickles of Belle Vernon. Children are Daryl B. Holler and wife Margaret Stablein Holler of Narvon, PA with sons Brian, James and Daniel; Dr. Edward W. Holler and wife Laurie Hodkins Holler, Seaford, VA with sons Jacob and Alexander; Kenneth M. Holler, Charleroi and fiancée Ruth Long with daughter Tara; and James S. Holler, and wife Marla Fitzpatrick Holler of Sykesville, MD with daughters Ashley and Jordan. Ernie has eight Grandchildren and five Great-grandchildren. Friends will be received on Monday from 6-9 P.M. in the Ferguson Funeral Home and Crematory, Inc.; 700 Broad Avenue, Belle Vernon, PA 15012 (724) 929-5300 www.FergusonFuneralHomeandCrematory.com. A funeral service will be held in the funeral home on Tuesday at 10:00 A.M., with Pastor Charles House officiating. Interment to follow in Belle Vernon Cemetery.

The family of Ernst Henry "Ernie" Holler created this Life Tributes page to make it easy to share your memories.

Send flowers to the Holler family.