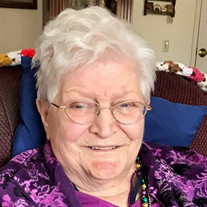 Evelyn Chapasko Grabana, 94, formerly of Belle Vernon, passed away Tuesday, August 29, 2017. She had been living at Strabane Woods Assisted Living in Washington prior to her death. A daughter of the late Peter and Fanny Olyarcheck Chapasko, she was born in N. Charleroi on March 22, 1923. Evelyn was a very active member of Holy Resurrection Orthodox Church of Belle Vernon, was a member and past President of the Ladies Altar Guild and was also active in the local AARP Senior Citizens group. She had been employed by Corning Glass in Charleroi and worked for the Belle Vernon Area School District in the cafeteria. Evelyn was the last of eight siblings. Survivors include one daughter and son-in-law, Evelyn and Dr. Dennis Davis of McMurray, two grandchildren, Kyra Williams and her husband, Ryan and Mark Davis and his wife, Jennifer, all of McMurray, four great-grandchildren, Ethan Williams, Lydia Williams, Andrew Davis and Evan Davis and many nieces and nephews. She was a Baba to her grandchildren and great-grandchildren and they were the loves of her life. In addition to her parents, she was preceded in death by her husband, Nick Grabana on May 20, 2007, two sisters, Mary Gibson and Julia Sokol and five brothers, John, Frank, Steve, Michael and Nick Chapasko. Friends will be received 2 to 4 and 7 to 9 P.M. Thursday in the Ferguson Funeral Home and Crematory, Inc., 700 Broad Avenue, Belle Vernon. www.FergusonFuneralHomeAndCrematory.com 724-929-5300 Funeral services will be in the Holy Resurrection Orthodox Church at 10 A.M. Friday with Fr. Samuel Smolcic officiating. Interment will follow in Belle Vernon Cemetery. A Parastas service will be in the funeral home on Thursday at 7:30 P.M. Evelyn loved her care given by the staff at Strabane Woods and Amedisys Hospice.

Evelyn Chapasko Grabana, 94, formerly of Belle Vernon, passed away Tuesday, August 29, 2017. She had been living at Strabane Woods Assisted Living in Washington prior to her death. A daughter of the late Peter and Fanny Olyarcheck Chapasko,... View Obituary & Service Information

The family of Evelyn Chapasko Grabana created this Life Tributes page to make it easy to share your memories.

Send flowers to the Grabana family.