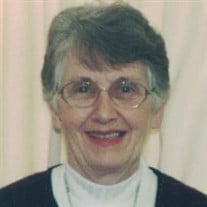 Florence M. Bowers, 86, formerly of Brownstown (Fayette City), went to be with the Lord with her family by her side on Wednesday, January 13, 2021 in Excela Frick Hospital. She was the daughter of the late David and Elizabeth Dankowski Prewett and was born in Wolfdale, PA on January 25, 1934. A resident of Brownstown for most of her adult life, she was a member of the First Christian Church of Belle Vernon where she was active in the ladies church group. Through her years of service in the church, she held various positions: teacher of Sunday school classes, vacation bible school, and always involved in the preparation of meals for church functions as well as helping in the kitchen. She loved reading, crossword puzzles, playing Scrabble, and watching the Andy Griffith show. Florence worked for the former G.C. Murphy Co. in Charleroi for several years from her late teens and the Charland Sewing Company in Speers in the sixties for five years. Survivors include her husband of 67 years, Pastor Donald A. Bowers, Sr., one daughter and son-in-law, Vicki and Barry Lynch of Mt. Pleasant, two sons and daughters-in-law, Donald and Cheryl Bowers Jr. of Ipswich, MA and Michael and Tessa Bowers of Purcellville, VA; five grandchildren, Christopher Lynch of Austin, TX, Nicholas Lynch of Mt. Pleasant, Amy Mathews (Ernie) of Dover, NH, Donald A. Bowers III of Los Angeles, CA and Leilana Bowers of Percellville, VA; three great-grandchildren, Jane, Arie and Annette Mathews; two sisters, Adaline Prewett of Perryopolis and Patricia Prewett of Mt. Pleasant; and one brother, Francis Prewett of Greensburg. In addition to her parents, she was preceded in death by a sister, Mary Kolick and a brother, David Prewett. Friends will be received Saturday 2 to 4 P.M and 7 to 9 P.M. in the Ferguson Funeral Home and Crematory, Inc., 700 Broad Avenue, Belle Vernon. 724-929-5300 www.FergusonFuneralHomeandCrematory.com. Funeral services will be in the funeral home at 1 P.M. Sunday with Pastor Sam Batton officiating. Interment will follow in Mt. Auburn Cemetery. Face masks are required in the funeral home and social distancing should be practiced.

Florence M. Bowers, 86, formerly of Brownstown (Fayette City), went to be with the Lord with her family by her side on Wednesday, January 13, 2021 in Excela Frick Hospital. She was the daughter of the late David and Elizabeth Dankowski Prewett... View Obituary & Service Information

The family of Florence M. Bowers created this Life Tributes page to make it easy to share your memories.

Send flowers to the Bowers family.