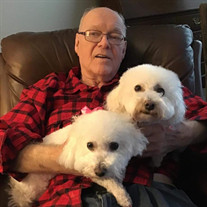 Francis W. ‘Stoney’ Jackson, 73, of Rostraver Twp., went to be with the Lord on Wednesday, March 24, 2021 in his home. Born in Monongahela on November 7, 1947, he was the son of the late Francis W. and Violet Sala Jackson. Stoney has resided in Rostraver Twp. for 44 years and was catholic by faith. He was employed at Vesta Five Mine as a coal miner, the Kurt J. Lesker Co. in West Mifflin, and then self-employed as a gunsmith operating Stoney’s Guncellar. A U.S. Army Veteran during the Vietnam war, Francis received two purple hearts and three bronze stars with valor. Not everyone who lost his life in Vietnam died there and not everyone who came home from Vietnam ever left there. “Thank You for your service”, but, from his wounds in Vietnam to the mental anguish when he returned it was simply too little too late. He never forgot. They say that men never stop to ask for directions. Stoney came knocking at the Barkey home in Dunkirk 51 years ago to get directions. Little did he know that his future wife was there when he came. The rest is history and a wonderful life in Rostraver Twp. when he married his wife, Deborah Porter Jackson in May of 1972. They welcomed two cherished sons, Dean Jackson of Pittsburgh and Gregg Jackson from nearby Rostraver Twp. He also is survived by his daughter in-law, Kelly Metzler and adorable granddaughter Nora Vivian. In his immediate loving family are Nell and Larry Hoosac, her daughter Amber with Alexa and Anthony Martin, nephews, Rusty and Danny Foust, and his dogs, Cotton and Candy. In addition to his parents, he was preceded in death by his sister, Joann Foust and his parents in-law, Janet and Kenny Herron who were an everyday part of his life until their demise. Stoney lived his life to the fullest with his love of hunting and fishing. He had many adventures that he spoke of with local trips as well as journeys to Canada, Maine, Maryland, and his property in West Virginia. When fishing he took his boat named “My Wife” to Lake Erie. His other passion was gardening and he enjoyed the trips to the casino where he made many new friends. Last of all he loved to relax and listen to Oldies Music. In lieu of flowers, Stoney would like you to ‘Pay it Forward”. He was willing to help so many. So, if there is a needy person or organization, please help them in memory of Stoney. Friends will be received on Friday from 3 to 7 P.M in the Ferguson Funeral Home and Crematory, Inc., 700 Broad Avenue, Belle Vernon. 724-929-5300. www.FergusonFuneralHomeandCrematory.com. A funeral blessing will be held in the funeral home on Saturday at 12:30 P.M. with Rev. Patrick Barkey officiating. Interment will follow in Monongahela Cemetery. Face masks are required in the funeral home and social distancing should be practiced.

The family of Francis W. Jackson created this Life Tributes page to make it easy to share your memories.

Send flowers to the Jackson family.