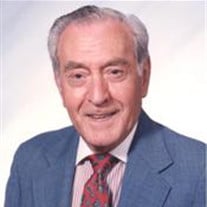 Frank C. Ferreri, 91, of Belle Vernon, passed away Friday, October 18, 2013, in Mon Valley Hospital. A son of the late Joseph and Rose Mazzo Ferreri, he was born in Gardhurly, KY on July 4, 1922. A member of St. Sebastian Roman Catholic Church, Frank served in the U.S. Army, Darby’s Rangers, during World War 2 and retired from Wheeling Pittsburgh Steel, Monessen Plant in 1985. He served 6 years as a councilman and 20 years as Mayor for Belle Vernon Borough, was a former member of the Fayette County Housing Authority for 15 years, and the VFW Post 699. Survivors include his wife of 67 years, Jean Vaccaro Ferreri, a son, Joseph Ferreri of California, PA, a daughter, Linda Jean Ferreri Overking and her husband, Patrick Overking, of Bruceton Mills, WV, two grandsons, Zachary Overking and his wife, Cassandra, and Joshua Overking and his wife, Nikki, and three great-grandchildren, Ivy, Olivia and Zoe Overking. In addition to his parents, he was preceded in death by his sister, Jean Bellante. A Funeral Mass will be celebrated in St. Sebastian R.C. Church on Monday, October 21, 2013, at 10:00 AM. with Msgr. Roger A. Statnick as celebrant. Entombment will follow in Belle Vernon Cemetery. Arrangements are being handled by the Ferguson Funeral Home and Crematory, Inc., 700 Broad Avenue, Belle Vernon (724)-929-5300 www.FergusonFuneralHomeandCrematory.com

The family of Frank C. Ferreri created this Life Tributes page to make it easy to share your memories.

Send flowers to the Ferreri family.