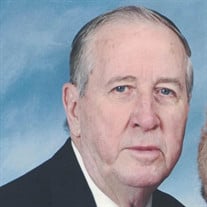 Franklin J. Reppert, 94, of Washington Twp., Belle Vernon, went to be with the Lord on Saturday, January 30, 2021 in Country Care Manor. A son of the late Paul C. and Myrtle Zundel Reppert, he was born in Belle Vernon on January 19, 1927. A resident of Belle Vernon most of his adult life, he was a member of the First United Methodist Church in Belle Vernon and the Belle Vernon American Legion Post 659. A U.S. Army veteran, he served in the 8th Calvary Infantry during World War II in the Philippines and Japan, where he was present for the signing of the Peace Treaty. Prior to operating his own business, Frank worked as a bricklayer, was employed at the Newell Chemical Plant, gas station attendant, grave digger and worked a short time in the Allenport Steel Mill. He had been self-employed for 60 years for Reppert Heating and Cooling, retiring 20 years ago. Frank was an avid bowler at Brunswick and the former Lynnwood Lanes. He is survived by a daughter, Darla Garrett of Belle Vernon, a son and daughter in-law, James and Kathy Reppert of Speers, three grandchildren, Chris (Katelyn) Garrett, Jeremy (Heidi) Reppert, and Jeffrey (Julie) Reppert, one great granddaughter, Josie Reppert, and many nieces and nephews. In addition to his parents, he was preceded in death by his wife, the love of his life, Jean ‘Dolly’ Sethman Reppert in 2011, a son-in-law, William Garrett, three sisters, Edna Grace Wilkinson, Joan Rach and Betty Mutich, and six brothers, Ernie “Rep”, John, Thurman, Howard, Charles and Donald Reppert. Friends will be received 6 to 9 P.M. Wednesday in the Ferguson Funeral Home and Crematory, Inc., 700 Broad Avenue, Belle Vernon. 724-929-5300 www.FergusonFuneralHomeandCrematory.com Funeral services will be held in the funeral home on Thursday at 10 A.M. with Rev. Sandy Fitzgibbons officiating. Interment will follow in Little Redstone Cemetery. Face masks are required in the funeral home and social distancing will be practiced.

Franklin J. Reppert, 94, of Washington Twp., Belle Vernon, went to be with the Lord on Saturday, January 30, 2021 in Country Care Manor. A son of the late Paul C. and Myrtle Zundel Reppert, he was born in Belle Vernon on January 19, 1927.... View Obituary & Service Information

The family of Franklin J. Reppert created this Life Tributes page to make it easy to share your memories.

Send flowers to the Reppert family.