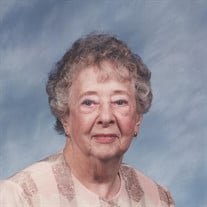 Genevieve Hale Vandermer, formerly of Charleroi, succumbed on August 26, 2016 in the Masonic Village, Elizabethtown, where she had resided since 2000. At age 101, referencing Dylan Thomas, she 'did not go gently into that good night'. Genevieve was born to Frank and Louisa Calverley Hale in Belle Vernon on July 14, 1915. Genevieve will be fondly remembered as Mother Advisor to many Rainbow Girls. Also, as having been employed at the Singer Sewing Co. store, Miller's Fashions and Tweeds Dry Goods, all in Charleroi. She enjoyed sewing all of her life, having done so since "I could hold a needle". Survivors include her son and daughter-in-law, Dr. August Hale and Barbara Vandermer, her daughter and son-in-law, Karen Vandermer and John Mollenauer, seven grandchildren, thirteen great-grandchildren and two great great-grandchildren. In addition to her parents, she was preceded in death by her husband, August H. Vandermer on September 30, 1991. She was the last surviving member of her siblings, Anna Irons, Alex Hale, Alfred Hale, Thelma Boag, Charles Hale, Frank Hale and Walter Hale. Friends will be received 2 to 4 and 7 to 9 P.M. Monday, September 5, 2016 in the Ferguson Funeral Home and Crematory, Inc., 700 Broad Avenue, Belle Vernon. (724)-929-5300 www.FergusonFuneralHomeandCrematory.com Funeral services will be in the funeral home Tuesday, September 6, 2016 at 12:30 P.M. Interment will follow in Charleroi Cemetery. If friends wish, memorial donations may be made to Masonic Village at Elizabethtown, Office of Gift Planning, "Compassionate Care," One Masonic Drive, Elizabethtown, PA 17022.

Genevieve Hale Vandermer, formerly of Charleroi, succumbed on August 26, 2016 in the Masonic Village, Elizabethtown, where she had resided since 2000. At age 101, referencing Dylan Thomas, she 'did not go gently into that good night'. Genevieve... View Obituary & Service Information

The family of Genevieve Hale Vandermer created this Life Tributes page to make it easy to share your memories.

Send flowers to the Vandermer family.