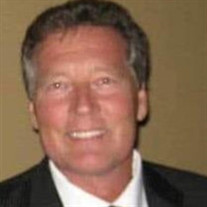 George Lyons, 63, of Belle Vernon, went to be with the Lord on Thursday, September 16, 2021 in UPMC Presbyterian Hospital. A son of the late Edward Lyons and Pearl Harvey Lyons who survives and resides in North Belle Vernon, he was born in N. Charleroi on May 26, 1958. A lifelong resident of Belle Vernon, he was a member of the Church of St. Anne, Rostraver Twp. George retired after working for many years at Kennametal, Inc. in Latrobe and also worked for several years at the Mon Valley YMCA. He was an avid Pittsburgh Pirates, Steelers, and Penguins fan. He was a wonderful and loving husband, father and grandfather. George battled several illnesses for years without a complaint. George was a hero to all that knew him! He was a dog lover, having had a dog most of his married life and most recently lost his buddy, Lucky, during the pandemic. In addition to his mother, he is survived by his wife of 41 years, Patty Bianchi Lyons; three daughters and two sons-in-law, Jillian Lyons of Greensburg and her fiancé, Brandon Mauro, Alicia and Dakota Ritz of Philadelphia, and Ulrike and Bjarne Rieckesmann of Bielefeld, Germany; two grandchildren, Luca Ritz and Fredolin Rieckesmann; and two brothers and sisters- in-law, Edward and Michelle Lyons of Monessen and Greg and Valerie Lyons of West Newton. He is also survived by two sisters-in-law and a brother-in-law, Marie Bianchi of Donora and Walt and Diane Bianchi of Charleroi; and many nieces and nephews. Friends will be received on Sunday from 2 to 4 P.M. and 7 to 9 P.M. in the Ferguson Funeral Home and Crematory, Inc., 700 Broad Avenue, Belle Vernon. 724-929-5300. www.FergusonFuneralHomeandCrematory.com. A blessing service will be held on Monday at 10 A.M. in the funeral home with Rev. David J. Nazimek officiating. Interment will be in West Newton Cemetery at a later date.

George Lyons, 63, of Belle Vernon, went to be with the Lord on Thursday, September 16, 2021 in UPMC Presbyterian Hospital. A son of the late Edward Lyons and Pearl Harvey Lyons who survives and resides in North Belle Vernon, he was born in... View Obituary & Service Information

The family of George Lyons created this Life Tributes page to make it easy to share your memories.

Send flowers to the Lyons family.