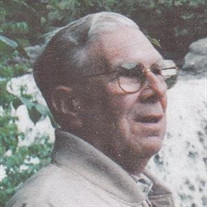 Grove Eugene Carroll Jr., 95, a resident of the Hillsboro, OR community, passed away on Friday morning, May 6, 2016 at his home. Grove was born on October 14, 1920 in Monongahela. He was one of three children born to Grove and Marie Caldwell Carroll, Sr. He was raised in Monessen and attended Monessen High School, graduating with the Class of 1938. He enlisted in to the US Army Air Corps during WW II as a communications officer and served his country for over two years in the South Pacific having an honorable discharge in 1946 as a 1st Lieutenant. He met his future wife, Rosadele Bonari while at a USO Dance. They soon began dating and were married on June 8, 1946 in Monessen. They made their home and raised their family in Port Vue until 1975. They both then traveled across the US in their RV and resided in Tucson, AZ until 2007 when they settled in Hillsboro to be closer to their daughters. Grove and Rosadele were married almost 70 years. Grove was an electrician for the US Steel company for over 30 years. Grove volunteered on the Port Vue School Board, the building committee for the new Port Vue Methodist Church and chaired the Authority that built the new high school. Upon retiring, he enjoyed traveling, square-dancing, building and repairing electronics, and reading. Survivors include his loving wife; Rosadele of Hillsboro, two daughters; Diane Carroll and Janis Carroll both of Hillsboro, two grandchildren; Nathan and Kate and five great grandchildren. In addition to his prents, he was preceded in death by two siblings; Robert Carroll and Esther Clark. A memorial service, along with Military Honors, will be held in the chapel of Belle Vernon Cemetery on Wednesday, June 8, 2016 at 11:00 A.M. with Rev. Suzanne Currie officiating. Arrangements are being handled by the Ferguson Funeral Home and Crematory, Inc. , 700 Broad Avenue, Belle Vernon. (724) 929-5300 The family suggest donations in Grove's name to the American Cancer Society.

Grove Eugene Carroll Jr., 95, a resident of the Hillsboro, OR community, passed away on Friday morning, May 6, 2016 at his home. Grove was born on October 14, 1920 in Monongahela. He was one of three children born to Grove and Marie Caldwell... View Obituary & Service Information

The family of Grove Eugene Carroll created this Life Tributes page to make it easy to share your memories.

Grove Eugene Carroll Jr., 95, a resident of the Hillsboro, OR...

Send flowers to the Carroll family.