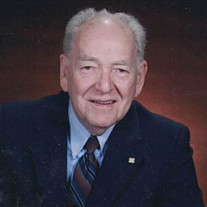 Harold William Strenske, 90, of Rostraver Twp., went to be with the Lord on Wednesday, April 17, 2019 in Mon Valley Hospital. A son of the late Charles and Jean Muir Strenske, he was born in North Belle Vernon on May 27, 1928. Formerly of North Belle Vernon, he had resided in Rostraver Twp. since 1955. He was a member of the First Presbyterian Church in Belle Vernon where he served as an Elder and Deacon, the Belle Vernon Lions Club where he received the Melvin Jones Award, the highest award given to a Lion, and the Antique Automobile Club of America. Harold retired in 1991 after over 38 years of service from the Fisher Body Plant in West Mifflin. He was an avid Steelers fan and followed Nascar races, especially his favorite driver, Jeff Gordon. Harold was very active in his church and community, loved woodworking, Big Band music, and western movies. He is survived by his wife, Rosemary Leyda Strenske, with whom he would have celebrated 57 years of marriage on December 29, 2019; two daughters and sons in-law, Cathy and Steve Reale of Ligonier and Karen Strenske (Joe Burnsworth) of Rostraver Twp.; a son and daughter in-law, William Charles and Amy Strenske of Rostraver Twp.; eight grandchildren, William (Lauren) Strenske, Joseph (Carey) Wickerham, Joshua Wickerham, Jamie Andrews, Michael Reale, Catherine Reale, Gina (Matt) Very, and Sidney West; four great grandchildren, Braden Andrews, Abel Wickerham, Halston Strenske, and Sophia Grace Very; and several brothers-in-law, sisters-in-law, nieces and nephews, and his beloved church family. In addition to his parents, he was preceded in death by his first wife, Mahala Harris Strenske in 1961, a daughter, Carol Wickerham Strenske in 2012, a sister, Ruth Braithwood in 2006, and a brother, Carl Strenske in 1983. Friends will be received on Monday from 2 to 4 P.M. and 7 to 9 P.M. in the Ferguson Funeral Home and Crematory, Inc., 700 Broad Avenue, Belle Vernon. 724-929-5300. www.FergusonFuneralHomeAndCrematory.com. A funeral service will be held on Tuesday at 11 A.M. in the First Presbyterian Church with Rev. Suzanne Currie officiating. Interment will follow in Belle Vernon Cemetery. The officers and members of the First Presbyterian Church will meet in the funeral home at 6:45 P.M. Monday to hold services followed by the Belle Vernon Lions Club at 7:30 P.M.

Harold William Strenske, 90, of Rostraver Twp., went to be with the Lord on Wednesday, April 17, 2019 in Mon Valley Hospital. A son of the late Charles and Jean Muir Strenske, he was born in North Belle Vernon on May 27, 1928. Formerly of... View Obituary & Service Information

The family of Harold William Strenske created this Life Tributes page to make it easy to share your memories.

Harold William Strenske, 90, of Rostraver Twp., went to be with...

Send flowers to the Strenske family.