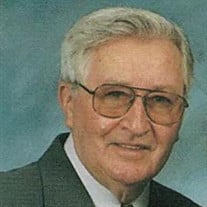 Harry C. Ellison “Pap”, 91, of Belle Vernon, after a short bout with cancer, went to be with Jesus on Tuesday, January 11, 2022 at home surrounded by his family. The son of the late Harry V. and Hilda Dean Ellison was born in N. Charleroi on August 10, 1930. A resident of Belle Vernon since 1954, Harry was a member of the National Management Association, a lifelong member of the First United Methodist Church of Belle Vernon, and most recently attended the Gospel Alliance Church in Rostraver Twp. with his son and family with whom he was residing. He was an avid bowler and golfer, belonging to several leagues. He also enjoyed going to the YMCA and Planet Fitness. Harry retired as a maintenance supervisor from Wheeling-Pittsburgh Steel in 1993 and continued to work for Ellison Industrial Controls as a mechanical design engineer. Harry never really retired. He was very proud to be a U.S. Army veteran, serving during the Korean Conflict. He is survived by a son and daughter-in-law, H. Kent and Maureen Ellison of Belle Vernon; a daughter, Dawn (Ellison) Curcio of Bullskin Twp.; six grandchildren, Casie and Patrick Hlafscak, Tony Curcio, H. Clay and Veronica Ellison, Garrett Ellison, Seth and Julie Ellison, Micale and Kevin (Ellison) Ringling; and five great-grandchildren, Nickolas Curcio, Zackary Hlafscak, Madelyn Ellison, Noah Ellison, and Harry Archibald Ellison. In addition to his parents, he was preceded in death by his wife, Wanda Ellison on October 11, 2009; a brother, Thomas Ellison; and three sisters, LaVerne Ellison, Virginia Moats, and Patricia Shetterly. Friends will be received on Friday from 2 to 4 P.M. and 7 to 9 P.M. at the Ferguson Funeral Home and Crematory, Inc., 700 Broad Avenue, Belle Vernon. 724-929-5300. www.FergusonFuneralHomeandCrematory.com. A funeral service will be held on Saturday at 10 A.M. with Pastor Alan Petke officiating. In lieu of flowers, “Pap” would have liked donations sent to the Cancer Society of America.

The family of Harry C. Ellison created this Life Tributes page to make it easy to share your memories.

Send flowers to the Ellison family.