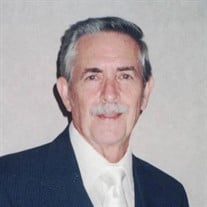 The Lord opened his arms and brought James H. Cunningham, Jr., of Belle Vernon, to a new life on Thursday, May 27, 2021 after battling a three month illness. A son of the late Howard and Pearl Phillip Cunningham, he was born May 5, 1936 on Indian Hill, Rostraver Twp. Jim graduated from Monessen High School with the class of 1954. He was proud to have served our country in the United States Army, serving a tour of duty in Korea as a surveyor on the DMZ line. He retired in 1986 after 30 years from the Monessen Plant of the Wheeling Pittsburgh Steel Company in the steam department. He also retired after 20 years as a bus driver for the Belle Vernon Area School District. He had a love for the outdoors and spent hours manicuring his shrubs and trimming his lawn. He was a perfectionist at all he did. He was a devoted husband, father, and grandfather, and loved spending family time with each and every one of them. He especially enjoyed his summer vacations at the beach with his family. He is survived by his loving wife, Joyce Bucci Cunningham with whom he would have celebrated 63 years of marriage on July 5, 2021. He was the proud father of son, James J. Cunningham and his wife Lynn of Sewickley, daughter, Jackie Eck and husband Gregg of East Stroudsburg, four grandchildren, Victoria Cunningham of Biltmore Lake, NC, Aaron Cunningham and fiancé McKenna Bergman of Charlotte, NC, Nicole Eck of Essex, MD, and Gregory Eck of East Stroudsburg; one sister, Cindy Phillips and husband Jeff of Dawson, brother-in-law Joe Bucci and wife Theresa of Canandaigua, NY, sister-in-law, Dolores Becken and husband Irv of Ontario, NY, and many nieces and nephews. In addition to his parents, he was preceded in death by his sister Joyce Waldow, mother-in-law Jennie Bucci Merando, sister-in-law Elizabeth Frank and husband Anthony, sister-in-law Marie Valente and husband Dominick, brother-in-law Michael Bucci and wife Helen, niece Annette Valente, nephew Michael Bucci, and great, great-nephew, Samuel Grimm. Friends will be received on Wednesday, June 2, 2021 from 3 to 8 P.M. in the Ferguson Funeral Home and Crematory, Inc., 700 Broad Avenue, Belle Vernon. 724-929-5300. www.FergusonFuneralHomeandCrematory.com. A blessing will be held on Thursday at 10 AM in the funeral home with Rev. James Bump officiating. Entombment will follow in Belle Vernon Cemetery.

The Lord opened his arms and brought James H. Cunningham, Jr., of Belle Vernon, to a new life on Thursday, May 27, 2021 after battling a three month illness. A son of the late Howard and Pearl Phillip Cunningham, he was born May 5, 1936 on... View Obituary & Service Information

The family of James H. Cunningham Jr. created this Life Tributes page to make it easy to share your memories.

Send flowers to the Cunningham family.