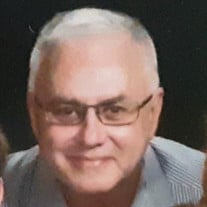 James ‘Jim’ Walter Yowonske, 63, of Belle Vernon, went to be with the Lord on Wednesday, March 17, 2021 after a valiant battle with cancer since July 2019. A son of the late Walter and Dorothy Matty Yowonske, he was born on July 12, 1957 in N. Charleroi. A lifelong resident of Belle Vernon, Jim was active for over 40 years at the First Christian Church in Fayette City. He was an Ambassador for Promise Keepers and was employed as a Customer Engineer for NCR in Southwestern PA for 43 years. Jim enjoyed skiing, hunting, fishing, working on his farm, camping, and spending time with family and friends at Laurel Hill State Park. Jim was a ham radio operator and hosted the yearly ham radio field day in June. Survivors include his ‘beautiful bride’, Diane Lint Yowonske, who he was married to for almost 40 years; three sons and a daughter in-law, Michael J. Yowonske of Irwin, Eric D. and Emily Yowonske of Brentwood, and Jesse Yowonske of Belle Vernon; a grandson, Silas James Yowonske; two sisters and brothers-in-law, Shirley and Dr. Charles Goyette of Greentree and Sallie and Ronald Cox of McMurray; a nephew, Christian Goyette of Greentree; and his mother in-law, Sandra Rosensteel Lint of Scottdale. In addition to his parents, he was preceded in death by his father in-law, Leslie Lint. Friends will be received on Friday from 2 to 4 P.M. and 7 to 9 P.M. in the Ferguson Funeral Home and Crematory, Inc., 700 Broad Avenue, Belle Vernon. 724-929-5300 www.FergusonFuneralHomeandCrematory.com. Face masks are required in the funeral home. Funeral services will be held on Saturday at 10 A.M. in the funeral home with Pastor Wayne Boring officiating. Interment will follow in Belle Vernon Cemetery.

The family of James 'Jim' Walter Yowonske created this Life Tributes page to make it easy to share your memories.

Send flowers to the Yowonske family.