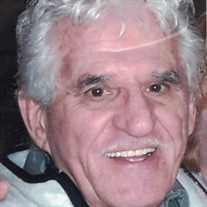 James John Taylor, 89, of Speers Hill, passed away Monday, March 29, 2021 at UPMC Mercy Hospital surrounded by his loved ones. A son of the late John and Elizabeth Taylor, Jim was born on November 12, 1931. Jim was a graduate of Charleroi High School where he was a member of the wrestling team. He played the trumpet and French Horn in the band winning the All State Champion French Horn contest. He was a Korean War veteran of the U.S. Navy serving on the aircraft carrier Franklin D. Roosevelt, where he earned many ribbons and a medal. After Jim was discharged from the service, he returned home and married the love of his life, Jackie (Jacqueline) Gesler of Fallowfield Township on July 20, 1955. They were blessed to have celebrated 65 truly dedicated, loving, wonderful years together. Jim was protestant by faith. He was employed by the Charleroi Post Office and retired from Montgomery Wards where he was an appliance salesman in Charleroi and at the Century III Mall store. His greatest enjoyment was having his family spending time at their family home. Holidays were very special. Jim and Jackie loved decorating the house, baking, and cooking meals for every holiday. Jim loved to dance, watch westerns on TV, and do word search books. He enjoyed traveling with his family, especially visiting many beaches on the eastern and southern coast including Ocean City, Md. and Daytona Beach, Fl. Jim was an avid swimmer. He always had his roller blades in his van. His greatest love was his family. His sense of humor was one of his precious traits, along with his humility and his concern for others. Jim was a caring son, devoted husband, loving father, adoring grandfather and great-grandfather, loyal friend and brother. In addition to his parents, he was preceded by death by a brother, Barry, and a sister, Lois. Jim was the last of his immediate family. Surviving are his wife, Jacqueline Gesler Taylor of Speers Hill, a son, James C. Taylor (Renae) of Monongahela, a daughter, Andrea Coulson of Mapleview (companion Bill Watson), grandchildren, Ashley (Zack Yocolano) Coulson of Mapleview, Sean (Christine) Taylor of Monongahela, and two cherished great-grandchildren, Taylor Lynn Coulson and Jacob Craig Taylor. Also surviving are numerous nieces and nephews including Karen Morgan and Kaci Biats, and a special treasured friend, Duane Coulson. Private services and burial were held on Thursday, April 1, 2021 in Belle Vernon Cemetery with the Rev. Raymond DiCammillo officiating. Arrangements were handled by Ferguson Funeral Home and Crematory, Inc., 700 Broad Avenue, Belle Vernon. 724-929-5300. www.FergusonFuneralHomeandCrematory.com. The James Taylor family want to express their deepest gratitude to all the people at the hospitals and personal care homes who provided such wonderful care to James while he was a patient and resident at their facilities.

James John Taylor, 89, of Speers Hill, passed away Monday, March 29, 2021 at UPMC Mercy Hospital surrounded by his loved ones. A son of the late John and Elizabeth Taylor, Jim was born on November 12, 1931. Jim was a graduate of Charleroi... View Obituary & Service Information

The family of James John Taylor created this Life Tributes page to make it easy to share your memories.

Send flowers to the Taylor family.