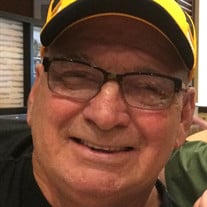 James W. Zunic, 65, of Lynnwood (Belle Vernon), passed away Saturday, January 12, 2019 in Jefferson Regional Medical Center. A son of the late John and Edna Albright Zunic, he was born in Brownsville on February 18, 1953. Residing most of his adult life in Belle Vernon, Jim was a member of I.B.E.W., Local 5 Union, retiring in 2014 after 30 years as an electrician. He had previously worked at the Clairton Plant of U.S. Steel for ten years. Jimmy enjoyed talking electrical with his son, visiting Anna Marie Island with his wife Lorraine, and the I.B.E.W. retirement club. An avid Pirate fan, the highlight of his life was his two granddaughters. Survivors include his wife of 41 years, Lorraine Bridge Zunic, one daughter and son-in-law, Lynnsi and Dustin Premoshis of Monessen and a son, Jesse Zunic, also of Monessen, a sister and two brothers-in-law, Patty and Randy Burnsworth and Joseph Bridge, all of Belle Vernon, a brother and three sisters-in-law, John and Sharon Zunic of Belle Vernon, Mary Joe Popp of Rostraver Twp., and Genevieve Bridge of Belle Vernon, two grandchildren, Alivia and Molly Premoshis and several nieces and nephews. In addition to his parents, he was preceded in death by one brother, Donald Zunic, and three brother-in-laws; Gene Popp, DJ Bridge, and Michael Bridge. Friends will be received 2 to 4 and 7 to 9 P.M. Monday in the Ferguson Funeral Home and Crematory, Inc., 700 Broad Avenue, Belle Vernon. 724-929-5300 www.FergusonFuneralHomeAndCrematory.com Funeral services will be in the funeral home on Tuesday, January 15, 2019 at 10 A.M. with Rev. Beverly Gross officiating.

James W. Zunic, 65, of Lynnwood (Belle Vernon), passed away Saturday, January 12, 2019 in Jefferson Regional Medical Center. A son of the late John and Edna Albright Zunic, he was born in Brownsville on February 18, 1953. Residing most... View Obituary & Service Information

The family of James W. Zunic created this Life Tributes page to make it easy to share your memories.

Send flowers to the Zunic family.