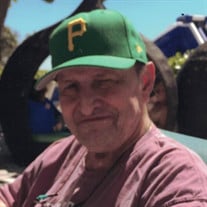 John H. “Jack” Jacobs, Jr., 72, of Speers, passed away on Wednesday, December 8, 2021. A son of the late John H. Jacobs, Sr. and Jeannine Harrison Jacobs who survives and resides in Dunlevy, he was born in New Eagle on June 8, 1949. Formerly of Dunlevy, Jack had resided in Speers for 24 years, was a graduate of Charleroi High School in 1967 and later graduated from the California University of PA. He was a member of the Dunlevy United Methodist church and retired in 2004 after 33 years from the Dept. of Welfare, Donora and Charleroi, as a Case Manager. He was the former President of the Charleroi Cougar Booster Club and a member for 40 years, the Tenth St. Athletic Club, the Allenport Rod & Gun Club where he was a former treasurer, a long-time member of the Garibaldi Golf League, was an avid chess player belonging to numerous chess leagues, and was rated by the US Chess Federation. Jack was a Pittsburgh Pirates and Pitt football super fan. He also was the co-founder of the Mon Valley Youth Soccer Association and chaired and ran the annual Charleroi Holiday Basketball Tournament for many years. He played soccer for Charleroi High School and was a three-year letterman and top scorer his senior year earning all WPIAL honors. He was inducted in the Charleroi High School Hall of Fame in 1991. He played for the Dunlevy Senior Redbirds from age 18 to the late 20’s. He was a head coach from 1987-1991 of the Elizabeth Forward HS Girls Soccer Team, was an assistant coach for the Charleroi H.S. Girls Soccer and was the Western PA alternate rep for the1967 Pan American games in the under 19 division. In addition to his mother he is survived by his wife of 27 ½ years, Peggy MacPherson Jacobs, two sons and daughters-in-law, John W. “Pic” and Rachel Jacobs of Charleroi, Bryan and Michele Jacobs of Dunlevy, a daughter-in-law, Sandy Jacobs of Speers, a brother Randy Jacobs of Dunlevy, a sister, Sherry (Tim) Mouyard of Charleroi, two grandchildren, Zach Shulock of Denver, CO, Jack Jacobs of Speers, a god daughter, Marisa Laskey, two brothers-in law, Scott (Annette) MacPherson and Tom (Barbara) MacPherson, all of Monongahela; and numerous nieces, nephews, aunts, and cousins. Due to COVID concerns, private services were held in the funeral home with Rev. Beverly Gross officiating. A public Celebration of Life will be held at a later date. Arrangements have been entrusted to the Ferguson Funeral Home and Crematory, Inc., 700 Broad Avenue, Belle Vernon. 724-929-5300. www.FergusonFuneralHomeandCrematory.com.

The family of John H. Jacobs Jr. created this Life Tributes page to make it easy to share your memories.

Send flowers to the Jacobs family.