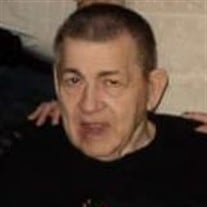 John H. (Pappy) Rehe, Jr., 79, of Naomi (Fayette City), went to be with The Lord on Saturday, March 25, 2017. A son of the late John Rehe, Sr. and Bettie Thompson Rehe, he was born in Grindstone on November 4, 1937. A U.S. Army veteran, John was a Marksman in Germany during the building of the Berlin Wall. He had been employed at the Monessen plant of Wheeling-Pittsburgh Steel, and also worked on furnaces and air conditioners. John loved camping, hunting, spending time with his grandchildren, and working in his garage. Survivors include two daughters and sons-in-law, Kimberly and Jeffrey Churchill of North Huntingdon, and Darlene and J.T. Thomas of Vanderbilt, six grandchildren, Chad Wall, David Mutich, Jacquelyn Leach, Samantha Mutich and her fiance Josh Poole, Adam Churchill and Jeremy Churchill, and one great-grandchild, Joshua Poole. In addition to his parents, he was preceded in death by his beloved wife of 55 years, Evelyn Rehe on September 2, 2016, a brother, James Rehe, and a sister, Bunny Redman. There will be no public visitation. Arrangements are being handled by the Ferguson Funeral Home and Crematory, Inc., 700 Broad Avenue, Belle Vernon. 724-929-5300 www.FergusonFuneralHomeAndCrematory.com

The family of John H. Rehe Jr. created this Life Tributes page to make it easy to share your memories.

Send flowers to the Rehe family.