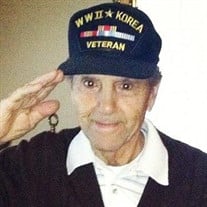 Joseph “Joe” Oliver, of Belle Vernon, son of the late Theresa Tiano and Antonio Oliverio, passed away on Wednesday, February 12, 2020 at the age of 97. Joe was born with a twin brother Nick on September 23, 1922. There was a total of 10 brothers and 2 sisters. In May of 1932, Joe and his twin brother Nick, accompanied their father Antonio, a WWI Veteran, to the famous 1932 Bonus Army March in Washington DC, to petition the U.S. Congress to appropriate the promised money to pay WWI veterans. Nick and Joe at the age of 6 put on scores of 3 round boxing matches for the veterans in the encampment at Anaconda, to raise money to buy food. Their story, pictures and experience were included in a PBS documentary and also in a historical book about The Bonus March by Dickson and Allen. Joe graduated from Belle Vernon High School in 1940 and served his country in the US Navy. He was most proud to have served in both WWII and the Korean War. Joseph was a mason and bricklayer by trade and became a foreman at Pittsburgh Monessen Steel Company where he later became a survivor of a leukemia caused by asbestos dust in the BOF furnace. For decades after surviving his disease he was a champion and advocate for safe work spaces. He became an expert witness for the plaintiff with the Beachler Law firm in Pittsburgh and testified regarding the working conditions at the steel mill. He was instrumental in getting dozens of workers compensation for their diseases. He is survived by his wife Frances Trader Oliver with whom he shared 74 years of marriage, and his adult children, daughter Margaret Oliver Elmore, RN and son Thomas Oliver. He was especially proud of being a hands-on grandfather to Lori Oliver PhD, Erin Elmore Esq., and Ashley Elmore Bosonac PhD whom he taught poetry, quotes and inspirational life’s lessons. He also is survived by 3 great grandsons. Friends will be received on Friday, February 14, 2020 from 11 A.M. to 12 noon in the Ferguson Funeral Home and Crematory, Inc., 700 Broad Avenue, Belle Vernon. 724-929-5300. www.FergusonFuneralHomeandCrematory.com. Funeral services will follow at 12 in the funeral home with Rev. Larry Coltura officiating. Interment will follow in Belle Vernon Cemetery with military honors. In lieu of flowers, please send donations to either the Belle Vernon VFW or the American Legion.

The family of Joseph Oliver created this Life Tributes page to make it easy to share your memories.

Send flowers to the Oliver family.