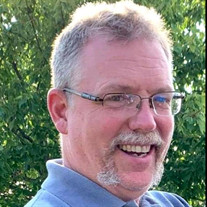 Kenneth R. Anderson II, 54, of Titusville, passed away on Sunday, October 3, 2021, as a result of injuries sustained in an automobile accident. A son of Kenneth R. and Paulette Cooper Anderson, who survive and reside in Fayette City. He was born in North Charleroi on December 27, 1966. Formerly of Fayette City, he had resided in Birdsboro, PA working for the DEP for 17 years, prior to moving to Titusville in 2007. He was a biologist for the PA Fish and Boat Commission for 13 years and was most recently employed by PENN VEST for the past 22 months. Ken was an avid fisherman, competing in tournaments as a member of fishing clubs in Crawford, Butler and Delaware Counties. He also loved to play hockey and was a regular player of deck hockey in Oil City as well as a member of the “Ole Dogs” adult ice hockey league in Meadville. Ken had a passion for herpetology and as a member of the citizen science group, PARS, Pennsylvania Amphibian and Reptile Survey, was often out looking for snakes, frogs, toads and salamanders to add to the lists of species found in the state. Ken was also a competitor at the annual “Rock In River” stone skipping competition in Franklin, PA. In addition to his parents, he is survived by his wife of 36 years, Linda Hough Anderson, a son and daughter-in-law, Kenneth R. Anderson III, who is serving in the U.S. Air Force, and his wife Chieko who live in Severn, MD, two daughters and sons-in-law, Clairissa and Curtis Hare of Greensboro, NC, and Breanna and Dylan Sonney of Edinboro, PA; four grandchildren, Louie and Sana Anderson, and Scarlett and Violet Hare, three brothers, Paul Anderson of Portersville and wife Stephanie, Jon Anderson of Fuquay-Varina, NC and wife Nikki, Josh Anderson of Murrysville, PA and wife Lindy, brother-in-law, Mike Hough and his wife, Beth, his mother-in-law, Louanna Guthrie Hough and many nieces, nephews and friends, all whom he dearly loved. Friends will be received in the funeral home on Friday from 9:00 A.M. to 11:00 A.M., the time of a memorial service with Pastor Mike Hough officiating. In lieu of flowers, the family suggests donations to S.O.N.S. of Lake Erie Fishing Club. Arrangements have been entrusted to the Ferguson Funeral Home and Crematory, Inc., 700 Broad Avenue, Belle Vernon. 724-929-5300. www.FergusonFuneralHomeandCrematory.com.

Kenneth R. Anderson II, 54, of Titusville, passed away on Sunday, October 3, 2021, as a result of injuries sustained in an automobile accident. A son of Kenneth R. and Paulette Cooper Anderson, who survive and reside in Fayette City. He was... View Obituary & Service Information

The family of Kenneth R. Anderson II created this Life Tributes page to make it easy to share your memories.

Kenneth R. Anderson II, 54, of Titusville, passed away on Sunday,...

Send flowers to the Anderson family.