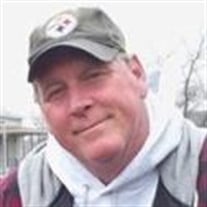 Larry K. "Jose" Baker, 59, of Belle Vernon, was welcomed into the gates of heaven on Saturday, April 22, 2017, peacefully at home. A son of the late Walter Joseph Baker, Sr. and Betty Lou Fowler Baker-Byrne , he was born in Parma, OH on April 10, 1958. Larry lived most of his adult life in the Belle Vernon area and was a member of the East Belle Vernon Athletic Association. In addition to his parents, he is preceded in death by three brothers, Walter Joseph Baker, Jr., Carl Baker, and George Byrne. Survivors include his wife Jamie Clark Baker for whom he was devoted to for 25 years; his four loving children, Amy and Juan Montoya of Los Angeles, CA, Amber Brassart and her former husband Nolan, Brian Baker and Tyler Baker, all of Belle Vernon; four grandchildren, which were his pride and joy, Jacob, Peyton and Emma Brassart of Belle Vernon and Vincent Montoya of Los Angeles, CA; five brothers, Gary (Shirley) Baker of Belle Vernon, Craig and his wife Judy Baker of Stockdale, his twin brother, Terry Baker of Belle Vernon, Tom Byrne of Indiana and Tim Byrne and his wife Patty of Belle Vernon; three sisters, Kathleen Baker of Belle Vernon, Karen Roberts of Belle Vernon and Tammy Barickman and her husband Wilbur of Meadeville; a sister-in-law, Tami and her husband Bill Puckey of Belle Vernon. He is also survived by two young men that he considered his "kids", Doug and Dom Latkanich. Larry was one of a kind. He was known for his never ending stories and silly jokes. Larry was loved by many and liked by all. Larry had always said "I've led a hard, full life, and if I would die tomorrow, I'd die a happy man." He said he had everything he ever needed and wanted in his life, a loving wife, amazing children, spectacular grandchildren, brothers and sisters that he loved and some amazing lifelong friends. Who could ask for more? Friends will be received on Wednesday from 4 P.M. to 5:30 P.M. in the Ferguson Funeral Home and Crematory, Inc., 700 Broad Avenue, Belle Vernon. www.FergusonFuneralHomeAndCrematory.com 724-929-5300. A funeral service will be held in the funeral home at 5:30 P.M. with Pastor Mike Hough officiating. In lieu of flowers, donations in Larry's memory may be made to his family.

Larry K. "Jose" Baker, 59, of Belle Vernon, was welcomed into the gates of heaven on Saturday, April 22, 2017, peacefully at home. A son of the late Walter Joseph Baker, Sr. and Betty Lou Fowler Baker-Byrne , he was born in Parma, OH on April... View Obituary & Service Information

The family of Larry K. Baker created this Life Tributes page to make it easy to share your memories.

Send flowers to the Baker family.