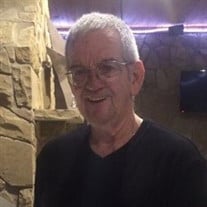 Lawrence R. ‘Beans’ Davis, 81, of Rostraver Twp., passed away Sunday, May 19, 2019. A son of the late James J. Davis Sr. and Alice Dolan Davis, he was born in Fairhope on February 22, 1938. Lawrence was a member of St. Sebastian Roman Catholic Church, the Brightwell Daugherty, Fayette City American Legion Post 484, the Naomi Club, and U.S.W. Local Union 1187 where he served for 30 years as a grievance officer. He had retired from Wheeling-Pittsburgh Steel, Allenport Plant as a machinist. Lawrence loved deer hunting and playing cards. He is survived by three daughters and sons-in-law, Leslie and Jeffrey McInerney of San Antonio, TX, Jodie and David Pepin of Georgetown, TX, and Lynn and Steve Matsick of Rostraver Twp.; three grandchildren, Ryan J. McInerney of Bloomington, IN., Amy E. McInerney of Boston, MA, and Andrew D. Pepin of Georgetown, TX.; three sisters, Jane White of Painsville, OH, Geraldine Nusser of Fairhope, and Nancy Patridge of Delaware, OH; and several nieces and nephews. In addition to his parents, he was preceded in death by his wife, Celia A. Behanna Davis on November 8, 2018; two sisters, Alice Sellaro and Mary DeRienzo; and three brothers, Charles, Thomas, and James Davis. Friends will be received from 2 to 4 P.M. and 7 to 9 P.M. Tuesday in the Ferguson Funeral Home and Crematory, Inc., 700 Broad Avenue, Belle Vernon. 724-929-5300 www.FergusonFuneralHomeAndCrematory.com. A blessing will be held in the funeral home at 9:30 A.M. Wednesday followed by a mass at St. Sebastian Roman Catholic Church at 10:00 A.M. Interment will follow in Belle Vernon Cemetery. The rosary will be prayed at 3 P.M. Tuesday, led by members of St. Sebastian Parish.

The family of Lawrence R. Davis created this Life Tributes page to make it easy to share your memories.

Send flowers to the Davis family.