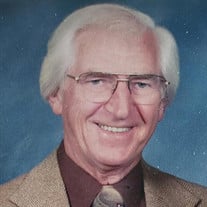 Lawrence J. ‘Fuzzy’ Morozek, 91, of Belle Vernon, formerly of Fayette City passed away on Saturday, October 9, 2021 in Greensburg at the Rehabilitation and Nursing Center of Greater Pittsburgh. A son of the late Steve and Mae Butler Morozek, he was born in Smock on March 13, 1930. Larry was a member of the Holy Resurrection Orthodox Church in Belle Vernon, the Naomi Club, the Fayette City American Legion, Post 484, and was a past President of the Belle Vernon Lions Club. He was a former member of the Fairhope Rod and Gun Club and was a peacetime veteran of the U.S. Army. He retired in 1992 from the Allenport Plant of Wheeling-Pittsburgh Steel Company and, along with his late wife, was the owner and operator of the Fayette City Florist Shop. Survivors include a daughter and son-in-law, Michelle and Jody Meisner of Mt. Pleasant and numerous nieces and nephews from the Morozek and Yusko families, with a special thank you to Chuck and John Yusko, both of Belle Vernon. In addition to his parents, he was preceded in death by his wife, Helen J. Yusko Morozek on August 22, 2017, two sons, Charles A. ‘Chuck’ Morozek in 2007 and a son in infancy, Steven Lawrence Morozek, a sister, Violet Finzel and a brother, Leo Morozek. Friends will be received in the Ferguson Funeral Home and Crematory, Inc., 700 Broad Avenue, Belle Vernon. 724-929-5300 www.FergusonFuneralHomeandCrematory.com , on Thursday 2 to 4 P.M. and 7 to 9 P.M. Funeral services will be at 10 A.M. Friday in Holy Resurrection Orthodox Church in Rostraver Twp. with Rev. Stephan Gresh officiating. Interment will follow in Belle Vernon Cemetery. A Parastas Service will be held in the funeral home on Thursday at 8 P.M. The family would like to thank former and present staff members of RNC, specifically, Becky, Hope, Terri, Kim, Angie, Joe and the activities staff, Debbie, Forrest and the front desk clerk, Joan for their kindness and care. If desired, in lieu of flowers, donations may be made to your local Lions Club or Children's Hospital of Pittsburgh.

Lawrence J. &#8216;Fuzzy&#8217; Morozek, 91, of Belle Vernon, formerly of Fayette City passed away on Saturday, October 9, 2021 in Greensburg at the Rehabilitation and Nursing Center of Greater Pittsburgh. A son of the late Steve and Mae Butler... View Obituary & Service Information

The family of Lawrence 'Fuzzy' Morozek created this Life Tributes page to make it easy to share your memories.

Send flowers to the Morozek family.