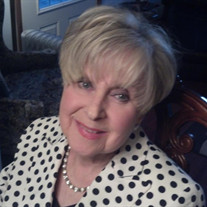 Lila “Faith” Hoffman Walker, 75, of Charleroi passed away peacefully at home on May 13, 2016, surrounded by her family. Born April 28, 1941, the daughter of the late George W. and LaVene Kenzler Hoffman of Belle Vernon, she resided in Belle Vernon attending schools there until moving to Rostraver Township during her later high school years. She graduated in 1959 from Rostraver High School where she was voted “Most Friendly” by her fellow classmates, who obviously saw in her an exuberance for life in her laughing smile and outgoing personality that endeared people to her throughout her life. Faith went on to attend the Art Institute of Pittsburgh graduating with a degree in Interior Design. She returned to the Valley where she become well known for her talent as an Interior Designer for both the C.L. Melenyzer and John G. Check furniture companies during the 1960’s. Though she retired professionally upon her marriage to Joseph J. Walker in 1968, she turned her artistic design talents and energy towards creating the beautiful home that she loved so dearly the past 48 years. But, beyond her love of home, she was a dedicated wife, mother, and grandmother whose love for her daughters was only surpassed by that for her grandchildren. Faith had many passions but her biggest was for “antiquing,” as she delighted in the thrill of the “hunt and find” of beautiful things. She was an avid “antiquer” and a well known frequenter of flea markets and antique shops in the Pittsburgh area for the past 50 years. She also possessed a green thumb and adored gardening, taking great pride in nurturing her daylily gardens and other flowers each year. Her creativity was not limited to her home and gardens, but it was evident in her gift of creative writing. She penned poetry reflective of life’s joys and sorrows that she often shared with close friends. She also wrote essays recounting her fond childhood recollections of growing up in Belle Vernon that were published in The Valley Independent over the years. She was a generous person who shared life’s blessings unselfishly. She loved and walked with the Lord and emulated His ways throughout her life. She attended Rehoboth Presbyterian Church and sang in the choir developing many faith filled friendships over the past 35 years. A lover of all things unique and beautiful, she always left a little sparkle behind her wherever she would go! We have lost a loving wife, mother, grandmother, and friend, but Heaven has a gained a radiant gem who we know will forever sparkle and shine in the hearts and memories of those whose lives she touched. She is preceded in death by her father and mother, George W. and Helen “LaVene” Kenzler Hoffman, and her dear aunt, Bernice Kenzler Spencer. She is survived by her husband, Joseph J. Walker Jr. of Charleroi, daughters, Dr. Colleen Walker Vamos (Daniel) of Las Vegas, Nevada and Arienne Walker Jennings (John) of Kennedy Township, and four grandchildren, Alexandra, Evan, Aidan, and Cameron. Family and friends will be received at Ferguson Funeral Home and Crematory, Inc., 700 Broad Avenue, Belle Vernon (www.FergusonFuneralHomeAndCrematory.com). Visitation will be held on Sunday, May 15, 2016 from 7-9pm and Monday, May 16, 2016 from 2-4pm and 7-9pm. A memorial service will be held to celebrate her life on Tuesday, May 17, 2016 at 12pm with a service following at Belle Vernon Cemetery.

The family of Lila Faith Walker created this Life Tributes page to make it easy to share your memories.

Send flowers to the Walker family.