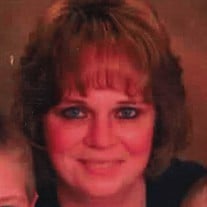 Lori Lynn Vargo, 49 of Charleroi, passed away Tuesday, November 5th, 2019 in Mon Valley Hospital. She was born December 24th, 1969 in North Charleroi, to Herbert and Eleanor Welsh Owens. She married John C. Vargo on March 19th, 1991, they renewed their vows April 22, 1995 and he survives with their two children Jonathan Mykal Vargo, a student at Mercyhurst University and Christopher Josef Vargo a student of Charleroi Area School District. Also surviving are her mother Eleanor Welsh Owens who resides in Washington Twp. , her one sister Susan (Terry) Lape of Washington Twp. , and four brothers James (Deborah)Owens of Fayette City, William (Robin) Owens of Belle Vernon, Herb Owens of Byesville, OH, and Timothy (Layne) Owens of Centennial, CO and many nieces and nephews. Preceding her in death is her father Herbert Owens on April 2nd, 2006, a retired employee of US Steel in Allenport. Lori was a 1988 graduate of Belle Vernon School District and received an Associate's Degree in management from Laurel Business Institute. She was employed by CVS Pharmacy (formerly Revco) in Rostraver Twp. for over 34 years, where she was the lead pharmacy technician. During her years of service she became well known by many of her customers and was nicknamed "The Hub" by her beloved co-workers. Lori was a devoted mother to her sons and very active in their sports: she was a Charleroi Cougar Football Mom and a Wrestling Mom. She would cheer on everyone's child, not just her own. She just loved being involved and volunteered her time when she could. She loved being a part of the party but was a quiet person that was easy to become friends with. She had recently started raising chickens that she quickly fell in love with, she would bathe them and care for them, naming them like any other pet even buying a leash and diapers to take them for walks. If we fully understood what heaven was like, we might want to go there before our time, but God has appointed a time for each of us to live and to die. Friends will be received on Monday from 6 to 9 PM at the Ferguson Funeral Home and Crematory, Inc. 700 Broad Avenue, Belle Vernon 724-929-5300. www.FergusonFuneralHomeandCrematory.com.

The family of Lori Lynn Vargo created this Life Tributes page to make it easy to share your memories.

Send flowers to the Vargo family.