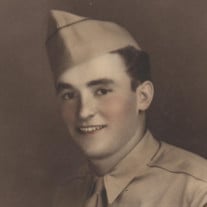 Louis Joseph Gazza, 92, passed away Thursday, February 9, 2017. Lou was born on April 22nd, 1924 to Robert and Palmera Gazza in Homer City, PA, the fourth of eight children. Lou lived a life of service to his community and country. After graduating from Homer City High School, he served as a Corporal in the US Army as a tank commander in the 672nd Amphibian Tractor Battalion. He played an instrumental role in one of the most pivotal raids of WWII. General Collin Powell described the raid of Los Baños as one of the most successful of WW II rescuing 2,146 American prisoners of war. After serving in the military for 4 years, Lou began a long career as a sergeant with the Pennsylvania State Police. While stationed in Belle Vernon, he met his beautiful bride, Dena Vannucci Gazza and they married in August of 1950. After retirement, Lou lived life to the fullest. He loved to spend time with his family and friends. He enjoyed golfing, hunting, furniture restoration, and gardening. He was a member of the Fraternal Order of Police and a lifetime member of the American Legion. He will be most remembered for his great sense of humor and his amazing ability to make everyone around him laugh. He was loved by many and his influence will forever remain in the lives of all who knew him. Above all, Lou loved his roles as husband, father, grandfather, great-grandfather, brother, and uncle. Lou is survived by his wife, Dena; two daughters and sons-in-law, Jayne Gazza Kelly (Charles Kelly) of Warwick, PA and Janet Gazza Pietras (Raymond Pietras) of Mt. Lebanon; grandchildren, Christyn Kelly Weber, Erin Kelly, and Michael Kelly; great-grandchildren, Lucas and Camryn Weber; brother, Robert Gazza of Homer City; and several nieces and nephews. The family will greet friends from 2 to 6 P.M. Monday, February 13, 2017 in the Ferguson Funeral Home and Crematory, Inc., 700 Broad Avenue, Belle Vernon. www.FergusonFuneralHomeAndCrematory.com 724-929-5300 A celebration of life will be held at 6:00 P.M. Monday with Pastor James Mimidis officiating. Private entombment will be in Belle Vernon Cemetery.

Louis Joseph Gazza, 92, passed away Thursday, February 9, 2017. Lou was born on April 22nd, 1924 to Robert and Palmera Gazza in Homer City, PA, the fourth of eight children. Lou lived a life of service to his community and country. After... View Obituary & Service Information

The family of Louis Joseph Gazza created this Life Tributes page to make it easy to share your memories.

Send flowers to the Gazza family.