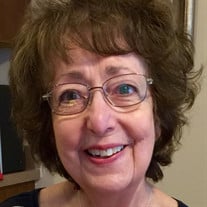 Marie Grace (Taravella) Blatnik, went to be with the Lord on Saturday, January 28, 2017. A daughter of the late Salvatore Taravella and Frances (DiPiazza) Taravella, she was born May 23, 1937 in Monessen, Pennsylvania. She was a graduate of Monessen High School Class of 1955 and The Douglas School of Business. At an early age she professed her faith in Jesus Christ and regularly attended church. Marie first worked at Lincoln Homes, Inc. of Fayette City, Pennsylvania as a secretary, where she met Thomas Blatnik, her beloved husband of 43 years. Marie worked for First Federal Savings and Loan in Monongahela as a teller and then for PNC bank, first as a branch teller at several locations, and was later promoted to the Trust Minerals Section at PNC headquarters in Pittsburgh, Pennsylvania as an assistant account manager for the department. Marie and Tom were united in holy matrimony in February of 1960 and shortly thereafter bought their first and only home in Fallowfield Township, located just outside of Monongahela, Pennsylvania. This union was blessed with two wonderful children, Maria and Thomas Blatnik. Throughout her life in her spare time, Marie enjoyed helping others, doing crafts, and serving for many years as a volunteer in the Mon Valley Hospital gift shop. Thomas preceded her in death on December 25, 2003 after a long but hard fought battle with cancer. As a result of her generous spirit and pleasant personality, she was loved by many. Her Christian life was as beautiful as the flowers that bloom early in the spring that she knew and loved so well. Marie's influence will forever remain in the lives of all who knew her. She quietly departed this life Saturday morning, January 28, 2017 at St. Elizabeth Medical Center Hospice, in Edgewood, Kentucky. Her beautiful life will forever be cherished in the lives of her children, Thomas Edward Blatnik of Hebron, Kentucky & Maria Theresa Lazur ( Mark Lazur) of Upper St. Clair, Pennsylvania, Four grandchildren Victoria Hawley (Chad) of Columbus, Ohio, Nicholas Lazur and Zachary Lazur of Pittsburgh, Pennsylvania and Jonathan Blatnik of Sharonville, Ohio. Brothers Joseph Taravella of Chandler, Arizona, Frank Taravella, of Belle Vernon, Pennsylvania and sisters Josie Zdilla of Apache Junction, Arizona & Joanne Cathers of McDonough, Georgia. Friends will be received from 2 to 4 and 7 to 9 P.M. Friday, February 3, 2017 in the Ferguson Funeral Home and Crematory, Inc., 700 Broad Avenue, Belle Vernon. www.FergusonFuneralHomeAndCrematory.com 724-929-5300. Funeral services will be in the funeral home on Saturday, February 4, 2017 at 10:00 A.M., with Pastor Nate Edwards officiating. Interment will follow in Sacred Heart Cemetery, Monongahela. In lieu of flowers, memorial donations may be made to St. Elizabeth Hospice, 483 S. Loop Drive, Edgewood, KY 41017 or Bible Chapel 300 Gallery Drive, McMurray, PA 15317. Thank you mother- for all that you have done, you took great care, of your daughter and son. You loved us all from the very start, with your warm, kind, and loving heart. Thank you mother, for being strong, While trying to teach us right from wrong. If anytime, we had a problem, you were there to help us solve them. You'd lift us up, when we were feeling blue, Thank you mother, for we could always count on you. You were such- an awesome mother, The love you showed was like no other. Thank you mother- for your dear, sweet love, now you'll watch over us from heaven above Source: http://www.familyfriendpoems.com/poem/thank-you-mother

Marie Grace (Taravella) Blatnik, went to be with the Lord on Saturday, January 28, 2017. A daughter of the late Salvatore Taravella and Frances (DiPiazza) Taravella, she was born May 23, 1937 in Monessen, Pennsylvania. She was a graduate of... View Obituary & Service Information

The family of Marie Blatnik created this Life Tributes page to make it easy to share your memories.

Marie Grace (Taravella) Blatnik, went to be with the Lord on...

Send flowers to the Blatnik family.