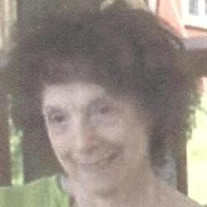 L. Marie Bradley, formerly of N. Belle Vernon, passed away Monday, June 30, 2014 in Grove City, OH. A daughter of the late James D'Errico, Mary Lanese D'Errico Church and a step-daughter of , Peter Paul Church, she was born in Monessen on November 25, 1923. A resident of N. Belle Vernon for most of her adult life, she was a member of St. Sebastian Roman Catholic Church. Marie taught school for St. Sebastian's for ten years and had been a medical transcriptionist at Jefferson Hospital. Survivors include four sisters and two brothers-in-law, Lenora Potts of North Carolina, Dolores Jones of Florida, Carmella and Bill Reynolds of Grove City, OH, with whom she made her home for the past six years, and Rosella and John McShane of Belle Vernon, two sisters-in-law, Mae Sturgis D'Errico of Belle Vernon and Jean Berkowitz D'Errico of Baltimore, MD, several nieces and nephews and great-nieces and great-nephews. In addition to her parents, she was preceded in death by her husband, David Bradley on July 24, 2000, one son, at birth, David Bradley, one sister, Jean Germock D'Errico and four brothers, James, Edward and Thomas D'Errico and Raymond Church. Friends will be received 11 A.M. until 12 P.M. Thursday in the Ferguson Funeral Home and Crematory, Inc., 700 Broad Avenue, Belle Vernon. 724-929-5300 www.FergusonFuneralHomeAndCrematory.com A blessing service will be in the funeral home at 12 P.M. Thursday followed by a funeral mass at 12:30 P.M. in St. Sebastian R.C. Church with Rev. Msgr. Roger A. Statnick officiating. Interment will follow in Belle Vernon Cemetery. If friends wish, memorial donations may be made to the Alzheimer's Association.

The family of Marie Bradley created this Life Tributes page to make it easy to share your memories.

Send flowers to the Bradley family.