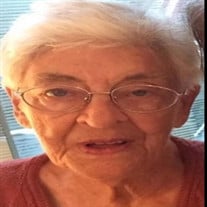 Marion S. Breakwell, 88, of Belle Vernon, passed away on Thursday, November 12, 2020 in the Baldwin Health Center. A daughter of the late Merwin G. and Elizabeth Bates Shryock, she was born in Erie on July 31, 1932. Marion was a member of the Fells United Methodist Church, had been active for many years with various bridge clubs and, when her children were younger, was an active hockey mom. She was a founding member and one of the first Paramedics for the former Rostraver Emergency Medical Service and had been a substitute teacher in the Belle Vernon Area School District. A resident of Belle Vernon for her entire adult life, Marion was a graduate of Allegheny College, where she met her late husband, Clifford Lee Breakwell, and was active in her sorority. She loved cooking, visiting the casino and the occasional scratch off. With a love for travel, her favorite trip had been Alaskan cruises. She had travelled throughout Europe, including London, Israel and the Middle East. Survivors include two sons, Christopher Lee Breakwell of Pittsburgh and Scott Breakwell, four grandchildren and their spouses, David L. (Kayla) Buchko, Nathan D. (Amanda) Buchko, Rachel Buchko-Ruiz (Michael Ruiz) and Sarah (Mark) Goulart, all of Ligonier, and twelve great-grandchildren, Auxanna, Natalie, Elizabeth, Giavonna, Isabella, Aubrey, Tatianna, Madeleine, Ava, Frederick, Margaret and Claire. In addition to her parents, she was preceded in death by her husband, Clifford Lee Breakwell on February 9, 1990, a daughter, Elizabeth Buchko on February 28, 1999 and a brother, David J. Shryock. Friends will be received on Monday from 2 to 4 P.M. and 7 to 9 P.M. in the Ferguson Funeral Home and Crematory, Inc., 700 Broad Avenue, Belle Vernon. www.FergusonFuneralHomeandCrematory.com 724-929-5300 A funeral service will be held on Tuesday at 10 A.M. in the funeral home with Pastor Ryan Washabaugh officiating. Interment will follow in Belle Vernon Cemetery. Face masks are required in the funeral home.

Marion S. Breakwell, 88, of Belle Vernon, passed away on Thursday, November 12, 2020 in the Baldwin Health Center. A daughter of the late Merwin G. and Elizabeth Bates Shryock, she was born in Erie on July 31, 1932. Marion was a member of... View Obituary & Service Information

The family of Marion S. Breakwell created this Life Tributes page to make it easy to share your memories.

Marion S. Breakwell, 88, of Belle Vernon, passed away on Thursday,...

Send flowers to the Breakwell family.