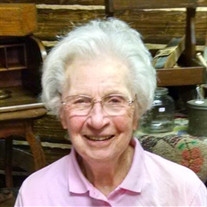 Mary Catherine (Kalman) Griglak of Perryopolis, Pa. passed gently from this life at her home on Sunday, August 14, 2016. She was 96 years old at the time of her passing and was surrounded at her bedside by her children. She is survived by daughters Deborah Griglak, Marcia (Griglak) Hankle, son Jeffrey Griglak, daughter Betsy Griglak, son-in-law Robert Hankle, grandchildren Matt Hankle and Ben Hankle as well as numerous nephews and nieces. Cay, as she was affectionately known, was preceded in death by her loving husband of sixty-eight years, Laddie L. Griglak. Born November 15, 1919, Cay was a lifetime resident of Perryopolis. She loved the town and its residents and was very proud of the role her family and especially her father, Joseph A. Kalman, played in its growth and development. Cay graduated from Perryopolis High School in 1937 and went on to Seton Hill College as a Biology major. She graduated from her beloved Seton Hill with honors in the class of 1941. Upon graduation she taught in the Perryopolis school system for several years before taking a leave of absence to raise a family. She returned to teaching in 1956 and served as the chemistry instructor at Frazier High School until her retirement in 1982. With a zest for life and an indomitable spirit, she embraced each day fully. Cay loved gardening and shopping, which she could do for hours on end, playing bridge and collecting antiques. She was an avid golfer, a sport she and her husband Laddie played together until they were 90 years old. She was kind, caring, generous and not one to shirk from giving her opinion. She was a pioneer of her generation and promoted human and women’s rights long before it became fashionable to do so. She treated everyone with dignity and respect. As a result, she was trusted and loved by countless students and many dear friends. A passionate lover of the arts, Cay was an active member of the Perryopolis Fine Arts Club for over sixty years. She was a woman of grace, character and candor and will be remembered fondly by those who were fortunate to have known her. “Shine on, oh beautiful one; you are loved more than you will ever know.” Friends are invited to attend a memorial mass at St. John the Baptist R.C. Church in Perryopolis on Thursday, August 25, 2016 at 10:00am with interment and reception to follow. Those who wish to honor Cay may make donations to the Perryopolis Area History Museum Memorial Fund. The Ferguson Funeral Home and Crematory, Inc., Belle Vernon is handling the arrangements. www.FergusonFuneralHomeAndCrematory.com 724-929-5300.

Mary Catherine (Kalman) Griglak of Perryopolis, Pa. passed gently from this life at her home on Sunday, August 14, 2016. She was 96 years old at the time of her passing and was surrounded at her bedside by her children. She is survived by... View Obituary & Service Information

The family of Mary Catherine Kalman Griglak created this Life Tributes page to make it easy to share your memories.