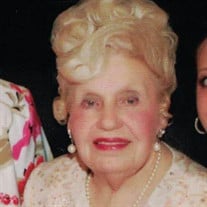 Mary Kathryn (Hutoff) Nega passed gently to eternal rest on the evening of July 7, 2020, surrounded by the embrace of her beloved family. Mary was 94 years young and looked forward to celebrating her 95th birthday this November. Until recent months, Mary lived independently in her home in Rostraver. She spent the last year living with her devoted daughter Joycelyn Gazi, who ensured that Mary was given every amount of care and comfort possible. Mary spent every day blessed with her adoring grandchildren and great-grandchildren delivering smiles and laughter to her in abundance. Even in the chaos of the world, her daughter Joy ensured that Mary was able to live with the same pleasures and zest for life that she embodied all the days. Mary Hutoff was born November 15, 1925, in the years between the Spanish Flu epidemic and the Great Depression. These times birthed what we remember as the Greatest Generation for good reason. It is therefore no wonder that she developed the strength of character, resourcefulness, and resilience that defined her life. Mary was born the eldest child of 9 to Fyodr and Anna (Lever) Hutoff. This Russian family lived in Monessen, Pa and valued their heritage and traditions. Mary described her childhood with her father planting fertile gardens and vineyards, sisters braiding each other’s hair, working hard, and attending Russian Orthodox Church. Even then, it was obvious that her beauty was a marvel- a beauty that miraculously never faded. She met Thomas Nega and recalled taking walks with him down the streets, followed closely by her sisters as chaperone. They were married in 1945 and began a love affair that stood the test of time. During the 66 years they were married, they remained a couple who sat in the evenings holding hands on their porch and never missed a single night without a kiss before bed. Tom and Mary built a life together in Rostraver on the large family farm. They welcomed a son, Tommy, and a daughter, Joy. Hard work was a cornerstone of Mary’s life. She did everything from hand-delivering fresh milk bottles, walking house-to-house taking the 1950 Census, and working in the Pittsburgh steel mills as a metallurgist during World War II. After running a successful dairy farm, they went on to continued accomplishment in all their future endeavors. Mary worked for Sears Roebuck as the first female credit manager. She was extremely forward thinking in women’s rights and believed that women had the ability to do anything. A story is told that one woman who came in for credit was told that a husband had to be there. Mary took a stand, advocated for her, and ensured that women were treated equally. Mary was bold, strong-willed, and never let pressure sway her conviction. Her intelligence and foresight provided a future for her family. She remained smart and savvy till the end. In many ways, Mary was a woman well before her time. Tom and Mary traveled through world throughout the years. From Russian and Ireland, to Spain, Italy, England, Germany, and all of Eastern Europe, Mary had a true passion for knowledge and appreciation of world culture. She would study art, architecture, and formal gardens. She passed her love of travel to her children and grandchildren, as well. Tom and Mary had motor homes, which they used to travel with family to Nova Scotia, New Orleans or points in between. Mary always kept her schedule full, even volunteering with St. Vincent DePaul until this past fall, having been honored with an award by the organization. In previous years, she was active with the Rostraver Historical Society, led many Scout Troops, was a member of CDofA, and Golden Agers. Mary converted to her husband’s devout Roman Catholicism, becoming a parishioner and donor for over 75 years at St. Sebastian Catholic Church in Belle Vernon. Mary was an award-winning master gardener, with strangers asking to take wedding and magazine photos in her gorgeous gardens. As if this weren’t enough, Mary was incredible at crocheting and embroidery, creating heirloom pieces for her family to cherish for generation to come. Mary was proceeded in death by her treasured son, Thomas W. Nega, Jr. and the love of her life, Thomas W. Nega, Sr., who undoubtedly greeted her in paradise. She is also survived by her devoted daughter Joycelyn M. Gazi, her granddaughters Allison Rachel Barajas, Ashley Mary (Scott) Clawson, and Katherine Elizabeth Nega, and her great-grandchildren Karolina Raina Barajas, Elias Thomas Barajas, and Aria Mila Clawson. Also surviving her sisters Eliane Rullo of Monessen and Noreen Husher of Ohio. Those also preceding her in death are sisters Nancy Rosset, PollyAnn Rudousky, Jean Fleming, Dolores ‘Cookie’ Bulger, brother Frank Hutoff, daughter-in-law Rosita ‘Chicky’ (Fantini) Nega, and son-in-law Edward P. Gazi. If the Trotsky saying is true that, ‘you only die of you don’t live on in others’, then Mary Nega is guaranteed immortality. She is fiercely loved by those who remain and the story of her life will be told to every generation to come. What more could anyone want than to live a remarkable life, experience true love, see the world, and have your story told by people who deeply love you? May we all experience such things as Mary Nega did in her lifetime and beyond. Friends will be received 9:00 A.M. until 11:30 A.M. on Saturday, July 11, 2020 in the Ferguson Funeral Home and Crematory, Inc., 700 Broad Avenue, Belle Vernon. 724-929-5300 www.FergusonFuneralHomeAndCrematory.com Face masks are required in the funeral home. A blessing service will begin at 11:30 A.M. Saturday in the funeral home followed by a 12 P.M. Funeral Mass in St. Sebastian Roman Catholic Church with Rev. Michael Crookston as celebrant. Entombment will follow in the Belle Vernon Cemetery Mausoleum. In lieu of flowers, the family asks that you please make a contribution to The Mrs. Claus Club of Bentleyville, helping those with cancer fight the fight. You can send a check to Mrs. Claus Club, 56 Lanik Rd., Bentleyville, PA, 15314 or through PayPal at [email protected]

Mary Kathryn (Hutoff) Nega passed gently to eternal rest on the evening of July 7, 2020, surrounded by the embrace of her beloved family. Mary was 94 years young and looked forward to celebrating her 95th birthday this November. Until recent... View Obituary & Service Information

The family of Mary K. Nega created this Life Tributes page to make it easy to share your memories.

Send flowers to the Nega family.