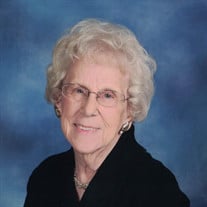 Mary Frances “Billie” Ryncosky, 93, of Belle Vernon, went to be with the Lord on Tuesday, March 22, 2022 in Penn Highlands Mon Valley Hospital. A daughter of the late Lloyd and Edna Meyers Younkin, she was born on December 9, 1928 in Confluence. Mary resided in Jeannette and Greensburg prior to moving to Belle Vernon in 2010. She was a former member of Grace United Church of Christ in Jeannette for 65 years where she was very active in the choir and served on various committees. Mary was employed by Elliott Company for a little over 2 years. Mary is survived by three daughters and sons-in-law, Linda (Jan) Schermerhorn of Alamogordo, NM, Sherry (Tom) Keenan of Jeannette, and Brenda (Joe) Kennedy of Belle Vernon; four grandchildren, April (Jeremy) Thompson of Jeannette, Jon (Destiny) Schermerhorn of Albuquerque, NM, Katie (Brian) Arndt of Albuquerque, NM and Heather (Brett) Penrose of Robinson; a granddaughter-in-law, Kaleena Kennedy of Belle Vernon; eleven great grandchildren, Jaquie, Katie, and Dustin Thompson; Brady and Taylor Arndt, Savahanna and Bentley Penrose, Dominic and Cameron Kennedy, and Evelynn and Kayleigh Schermerhorn and her feline roommate, Peanut. In addition to her parents, she was preceded in death by her husband, Robert G. Ryncosky on May 18, 2014; a grandson, Joey Kennedy on June 19, 2020; a sister, Maxine Weible; and a brother, Denny Younkin. Friends will be received on Thursday from 5 PM to 8 PM in the Ferguson Funeral Home and Crematory, Inc., Belle Vernon. (724-929-5300) www.FergusonFuneralHomeAndCrematory.com. A Funeral service will be held in the funeral home on Friday at 10 AM with Rev. Mary Kay Glunt officiating. Interment will be in Belle Vernon Cemetery. The officers and members of the First Presbyterian church will meet in the funeral home on Thursday at 6:30 PM for a service. In lieu of flowers, donations may be made to the First Presbyterian Church in Belle Vernon.

The family of Mary Frances Ryncosky created this Life Tributes page to make it easy to share your memories.

Send flowers to the Ryncosky family.