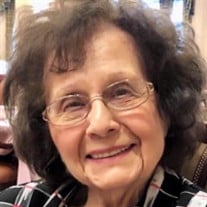 Nell Valdiserri, 94, of Belle Vernon, went to be with the Lord on Saturday, October 9, 2021. A daughter of the late Andrew and Eva Cherna Malaga, she was born in Pricedale on January 14, 1927. A lifelong resident of Belle Vernon, Nell was a member of St. Sebastian R.C. Church where she a member of the choir for many years. Nell, along with her late husband, Ernie, were the owner and operators of Valdiserri’s Bakery prior to their retirement in 1987. Survivors include four daughters and three sons-in-law, Sheryl and Gary Cramer, Teri and Rick McFerron, Cathie and Jim Cramer and Valerie Valdiserri; twelve grandchildren: Palmer McCloskey (Christina), Kristen Dexter (Kevin), Joseph McFerron (Christine), Nikolas McFerron (Lindsey); Matthew Cramer (Bonnie), Michael Cramer (Jen); Katie Cramer, Jenna Cramer (Rob Oliver), Ashley Cramer McClintock and Jordan Cramer; Lindsay Hinzman (Justin Pagano) and Drew Hinzman and 21 great-grandchildren: Alex, Ethan and Lina McCloskey; Addison, Clayton and Haley Dexter; Casey McFerron, Joey McFerron, Adele, Gus, Luke, Garrett and Marcus Cramer; Colton, Clare, Lily and Emily Cramer; Grace and Ray McClintock and Beau Cramer; Noah Cramer Oliver. In addition to her parents, she was preceded in death by her husband, Ernest L. “Ernie” Valdiserri on May 7, 2005 and 12 siblings: five sisters, Dolores Malaga, Catherine Brady, Helen Costella, Anne Knotter Thomas, and Mary Clifford; and seven brothers, George, Nick, Mike, Steve, Joe, John, and Andy Malaga. She is also survived by her loving community at Brookdale Senior Living. Nell was a kind, warm and loving mother, grandmother and great grandmother. She treasured her children and embraced every moment with them. She made friends everywhere she went and was dedicated to sharing her famous fudge with those many friends. She was a devotee of the Rosary, praying it many times a day. Nell was a fabulous cook, voracious reader, great bowler, music lover with a beautiful voice and an avid Steeler fan, rarely missing a game. A funeral mass was held in Sebastian R.C. Church with Rev. Michael J. Crookston as celebrant, followed by interment in Belle Vernon Cemetery. Arrangements were entrusted to the Ferguson Funeral Home and Crematory, Inc., 700 Broad Avenue, Belle Vernon. 724-929-5300. www.FergusonFuneralHomeandCrematory.com. “There are some who bring a light so great to the world that even after they are gone, the light remains.”

Nell Valdiserri, 94, of Belle Vernon, went to be with the Lord on Saturday, October 9, 2021. A daughter of the late Andrew and Eva Cherna Malaga, she was born in Pricedale on January 14, 1927. A lifelong resident of Belle Vernon, Nell was... View Obituary & Service Information

The family of Nell Valdiserri created this Life Tributes page to make it easy to share your memories.

Nell Valdiserri, 94, of Belle Vernon, went to be with the Lord...

Send flowers to the Valdiserri family.